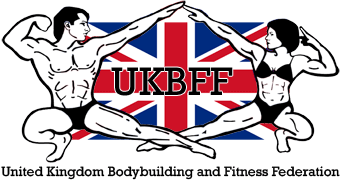 We are very pleased to announce that the UKBFF have agreed to become co sponsors of the Reunion.

The UKBFF Executive Committee Members and all UKBFF Officials and Judges are not employees and are involved solely because they have passion for our sport.

The UKBFF sanctions Qualifying events throughout England, Wales, Scotland and Northern Ireland. At these Qualifying events, any UKBFF Member can compete and hopefully qualify for the UK British Finals which is held in October each year.

At the UKBFF Qualifying events and the UK British Finals, the following categories are open to UKBFF members:

The category Men's Classic Bodybuilding has a height to weight restriction.

The winners of the men's weight classes in the UKBFF Finals in October, each receive the UK Class Title of British Champion and compete against each other for the Overall title and the right to apply for a pro-card. Pro status will only be granted if the athlete is a UK citizen.

The UKBFF sends teams to the IFBB European Championships and the IFBB World Championships. All international amateur competitions are drug tested. The UKBFF Executive Committee has the final say which athletes will represent the UK. The athletes that are chosen will be drug tested.

If a competitor is representing the UKBFF at the European or World Championships, all expenses are paid for by the UKBFF.

A competitor, who wins the Overall at some IFBB Invitational Events, like the Arnold Amateur Classic and Amateur Olympia, can apply to the UKBFF Executive Committee to be considered for Pro-status. Pro status will only be granted with the approval of the UKBFF and the IFBB Headquarters.

The UK NATIONALS is a qualifier and drug-testing is performed. We also do a selection for the IFBB International and Invitational events. The UKBFF has been conducting drug-testing since 1986.

The UKBFF is here to promote a healthy lifestyle and does not condone the use of performing enhancing substances.