The end of a Legend

A successful swimmer in school, he was selected for the British swimming team for the 1940 Summer Olympics but was unable to compete due to World War II.

Blears enlisted in the Merchant Navy in 1940 during World War II, with his knowledge of Morse code leading to him being made a radio officer.Whilst serving as second wireless operator on board the SS Tjisalak, a Dutch merchant ship, his ship was torpedoed by the Japanese submarine I-8 on March 26, 1944 during a voyage from Melbourne, Australia to Colombo, Ceylon. The survivors were taken prisoner by the Japanese and the majority were summarily executed by beheading .Blears managed to escape by leaping into the water and found his way into a lifeboat, where he and four other survivors began attempting to sail to Ceylon until the United States Navy liberty ship SS James O. Wilder retrieved them three days later. Blears was given a can of peaches by his rescuers and celebrated every year thereafter on March 29 by eating a can of peaches.

He learned to wrestle at the YMCA, debuting in 1940 at the age of 17, and  wrestled sporadically around the world during his wartime service in the merchant navy.

In 1946, James relocated to New York City in the United States, where he shared an apartment on Amsterdam Avenue with fellow wrestlers Stu Hart and Sandor Kovacs.Early in his United States career, Blears wrestled as "Jan Blears".

In the early 1950s, Blears developed the villainous character of "Lord Blears", a snooty British aristocrat who wore a cape and monocle and carried a cane. He was managed by the tuxedo-wearing Captain Leslie Holmes, a friend of Blears' from his schooldays who had also traveled to the United  States. 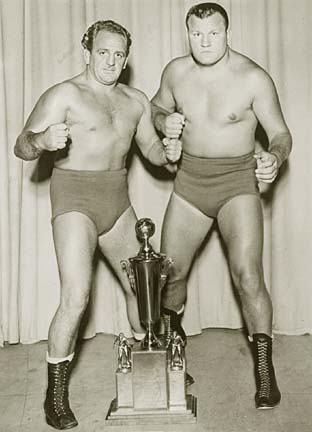 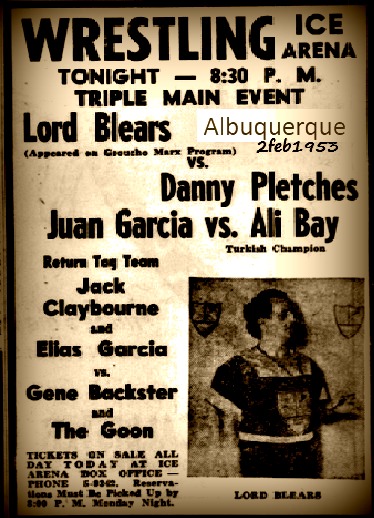 During  the late 1950s, Blears relocated to Hawaii after developing a fondness for the state during a tour, where he built his career in the Honolulu-based promotion Mid-Pacific Promotions. Blears had a single reign as NWA Hawaii Heavyweight Champion, defeating King Curtis Iaukea on October 25, 1961. He lost the championship to the Masked Executioner on December 13, 1961. Blears also held the NWA Hawaii Tag Team Championship numerous times between 1955 and 1964. 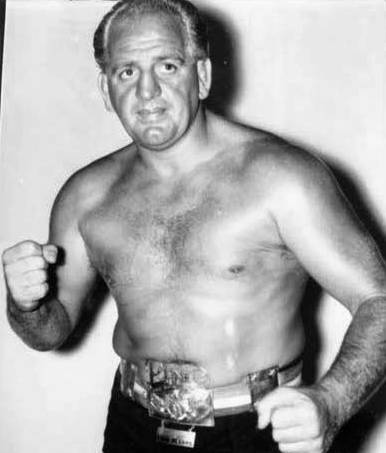 At the invitation of Rikidōzan, Blears began wrestling in Japan in the 1950s but after the death of Rikidōzan in 1963, Giant Baba - the owner of All Japan Pro Wrestling - asked him to identify foreign wrestlers to perform for AJPW. Blears arranged for wrestlers such as Davey Boy Smith, Don Leo Jonathan and Dynamite Kid to tour Japan. From 1973 to 2001, Blears made appearances with AJPW as an on-screen authority figure under the title of chairman of the Pacific Wrestling Federation.Here, he was to befriend  our Heavyweight

Champ:Wayne Bridges . Both wrtestlers being former International swimmers, they immediately formed a bond which continued into Blears Hawaii days of surfing.

( Lord Blears prepares for a bout in Japan)

Blears stopped wrestling full-time in 1965, transitioning to a commentator for the Hawaiian Championship Wrestling broadcast and the booker for the promotion. 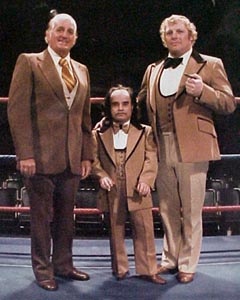 In the 1980s, Blears provided commentary for the American Wrestling Association's broadcasts on ESPN.At the AWA supercard "Super Sunday" on April 24, 1983, Blears served as guest referee for a high-profile title bout between Hulk Hogan and AWA World Heavyweight Champion Nick Bockwinkel that saw Bockwinkel retain via a Dusty finish.[

Blears made his first acting appearance in 1950, playing a dramatized version of himself in an episode of The Buster Keaton Show.

Following his transition to America, albeight through the war, James settled in his new Country,in the mid-1940s and ultimately successfully applied for United States citizenship.During his residence application, James Blears  legally changed his name to "Lord Blears".

While living in Chicago, Blears would met Leonora "Lee" Adelaina (died 2007), whom he would ultimately marry. The couple had four children: two sons, James Jr. ("Jimmy") (1948–2011) and Clinton, plus two daughters, Laura (born 1951) and Carol. All four rose to prominence as professional surfers.

Being  a former International Olympic swimmer, he was naturally an avid fan of surfing and  served as commentator and master of ceremonies for many surfing events in Hawaii, earning him the title, "the voice of Hawaiian surfing.It was during this period that He introduced Wayne Bridges to Hawaii Five-O actor Jack Lord, while Bridges was wrestling in the tropical Islands.

Sadly, his devoted wife  Lenora predeceased him in 2007 and his  eldest child, Jimmy, died in 2011. Blears spent the final years of his life in a nursing home in Honolulu

The Legend finally died on March 3, 2016 in the Kuakini Medical Center in Honolulu at the age of 92.

Here follows a tribute to a lifelong friend received by us  from former World of Sport wrestler and Canadian Professional football player : BUTTS GIRAUD. 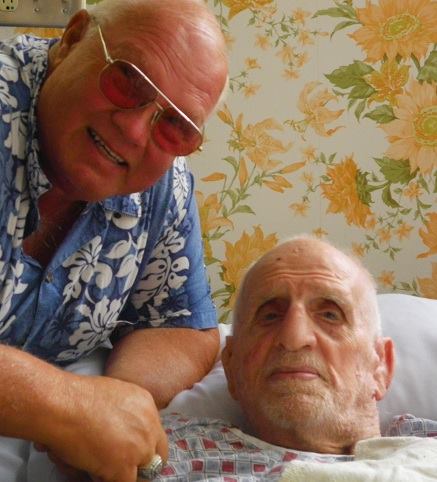 I was never a super Star athlete or a millionaire businessman. I was just one of those guys who worked hard, had a clear vision of where he wanted to go in life and gave it his best shot at whatever he did. I made my “many mistakes” along the way, never losing sight that failures can be turned into great success stories. At the same time, I was fortunate enough to see and experience many adventures while rubbing shoulders with some pretty interesting characters. My autobiography, "The Last Chapter", captures and illustrates some of these life experiences. Without books, the art of telling stories and passing them down through the generations is lost. I am confident these stories of mine will though. It’s hard for me to imagine a world without Lord James “Tally Ho” Blears in it. Maybe because he’s been a part of my world — at least the surfing part — since the very beginning. Meaning: the first time I saw his brief cameo in The Endless Summer. Introduced as “the famous wrestler” the big man I would later call “His Lordship” was shown riding at Haleiwa, wearing what indeed looked like a pair of grappling shorts and having a lot of fun in the process. I grew to love the guy and shall miss him dearly.

The thing about Tally Ho Blears, I would learn, was that he almost always seemed to be having fun, his barrel chest perpetually expanded on the verge of a chuckle, ever smiling at what he obviously viewed as his good fortune. Happy to share it with just about anyone who’d listen.

Because we mostly listened to Tally Ho, given the decades he spent behind the microphone at about a million Hawaiian surf contests, “The Voice of Hawaiian Surfing.”

“Look at ‘em go,” he would say with equal vigor about both the 5th-place junior girl at a Waikiki Surf Club meet and Shaun Tomson winning the Pipe Masters. “Stitching the wave. Up, down. Beautiful.”

I had the good fortune to work beside His Lordship at a few of those events, to basically sit at his feet and listen to his stories as much as check in quarterfinalists. He’d talk of his days as a professional wrestler in the 1950s, when that comic, violent theatre was experiencing a big popularity boom worldwide. Having been born in Manchester, England, he decided to assume the character of a snobbish English Lord, complete with cape, monocle and cane. The cane came in handy, he remembered, when after besting a Mexican champion in front of a rowdy local crowd in Salinas, California, he and his valet were attacked by the fans and were faced with a much less choreographed struggle to reach the waiting cab.

“It may have been theatre, but it wasn’t easy,” he told me. “At 250 pounds you can’t be lifted overhead and slammed to the ground without it hurting. And I had cauliflower ears that were so badly swollen I could see them without a mirror. Had to sleep with cut-in-half tennis balls strapped on my head.”

Hardly a romantic image, but then His Lordship made up for the battered visage with a romantic heart. He recalled a day in the lobby of Chicago’s Palmer House hotel, I think it was, when he first glimpsed a beautiful Italian girl named Lee and told himself, “That’s the mother of my children.” Marry they did, eventually having four kids — Jim, Laura, Carol and Clinton — and raising them on the beach at Waikiki. Turned out that His Lordship had come to the Islands headlining the popular “50th State Wrestling” tour, grappling with the likes of Gorgeous George, Chief Billy White Wolf and The Thing, but ended up falling in love with the weather and Waikiki lifestyle. Taught to surf by the beach boys (and faced with the prospect of returning to mid-winter Minnesota for his next bout) his Lordship planted his flag on Kuhio Beach and never left.

His kids would eventually make their mark, son Jimmy winning the 1972 World Title, Laura competing against the men in the 1974 Smirnoff (and famously appearing in a provocative Playboy spread) and Clinton as a top-ranked HSA junior and all-around waterman. But over the years it was His Lordship that would cast the biggest shadow. Having placed in a few events himself (a perennial Senior competitor) the former wrestler and wrestling promoter found his place on the folding chair, a soggy heat sheet on his clipboard and a mic in his hand, indeed becoming the voice of Hawaiian surfing throughout much of the ‘60s, ‘70s and ‘80s. And what a voice it was, the deep kindliness of tone lending a measure of dignity and acknowledgement to the efforts of first-timers and champions alike. In all the years I knew the man I only once heard that voice grow harsh with enmity, and that was when recalling his experiences in World War II, when in the Pacific his transport ship was torpedoed by a Japanese submarine. Lined up for execution on the sub’s deck, Blears made a desperate move.

“I broke free of my bonds, kicked one of the soldiers with the sword and dove overboard,” he told me. “I was going to drown rather than let them behead me.” He didn’t drown, though, but swam for hours before finding a piece of floating wreckage, and was later picked up by a passing Allied ship. Later awarded a medal for bravery by the Queen of the Netherlands, His Lordship never forgave the cruelty of his captors — a mindset that, no doubt, led to a few awkward moments when in another life he’d find himself commentating at the Marui Pipeline Masters.

But other than that, the big man never seemed to have a bad word to say about anybody or anything. And upon news of his passing this week at age 92, and upon reflection of his long, exciting, compassionate life, the word that comes to my mind was one of His Lordship’s favourites, expressed with deep sincerity so many times, watching so many waves being ridden.