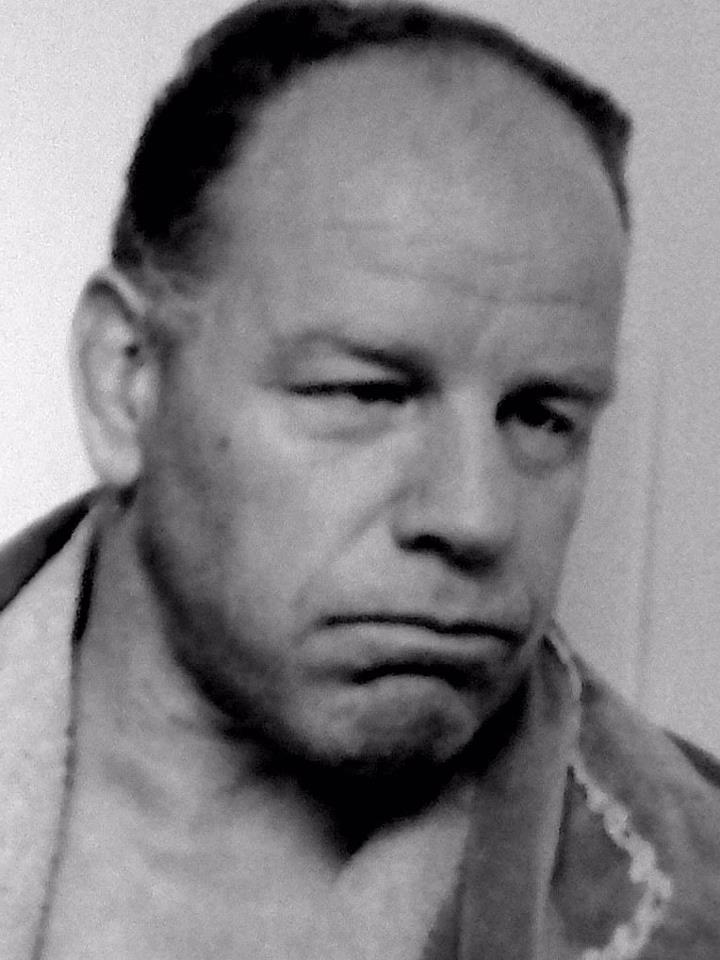 His parents were devout Christians and followers of the Christadelphian sect, where his Father would often preach during Sunday services, and during his adolescent years, it was assumed that he might become a Minister in the faith. As a result of this strict religious upbringing, the Bible became and remained the Welshman’s favourite book, and was able to recite parables by heart on many occasions. In later years, he would often quote sayings with great delight when chatting with his friends or in times of stress.

John was an average student in school at Blackfen, but soon showed signs of athletic prowess, although not as you might expect from the weights or wrestling, but as a cyclist, although he had started training at the ROFSA in Woolwich around 12 years young.  During that era, there was a world renowned cycling Champion and Olympian from Manchester in Northern England called Reg Harris  whom young Yearsley idolised, even developing a look similar to his hero. He begged his parents to invest in his first bicycle that had drop handlebars and ten gears spending his teen years riding continouosly, joining a local cycling Club and entering several competitions. Ironically, it was this exercise to his chest that started the development of his now famous enormous rib cage that would eventually house his huge 60 inch plus chest. 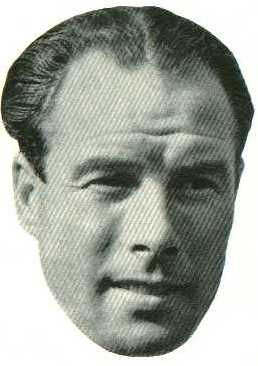 Just after the end of the second World War in 1947, John received his conscription papers to join the army, but never being one to volunteer for anything and actually abhorring violence, he managed to get out of the uniform service by pleading  a perforated ear drum  and flat feet. 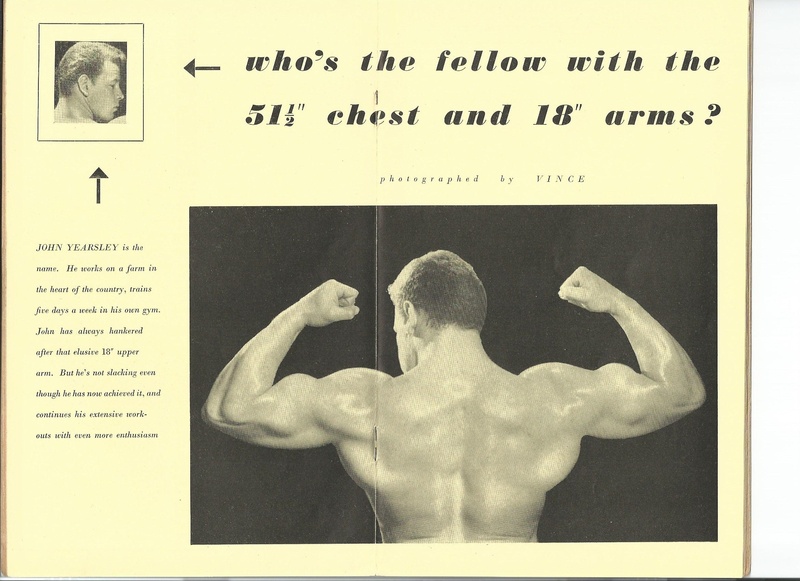 By the early 1950’s he had moved jobs to a farm in Kent  and it was here that the young athlete really started to develop his incredible physique. His body was such that it responded to heavy weightlifting routines and strict dieting very quickly, and John emulated his new found hero and friend to be: Reg Park who was a world renowned bodybuilder and physique Champion. Yearsley soon realised that he had amazing strength when training, outstripping all his companions when lifting. He would comfortably squat 600 lb and deadlift  600 lb and even bench press 400lb just in the gym. Soon, he set his sights on competitive lifting and went for the National strength set title which involved the total poundage of three lifts including the bench press, winning the title  easily and setting a new British record that remained unbroken for many years to follow. At the Scala Theatre in London, he broke the World crucifix record by holding two dumb bells at arms length for 1 minute with an incredible 76 ¾ lbs in each arm. His training routine always started with his legs: front or reverse squats, calf raise, followed by front or rear shoulder pressing , then the bench press and straight arm pullovers, onto the curls, front reverse and the now world famous invention of his own named in his honour : the ‘Y’ curl, finishing that section with dumbbell tricep press and finally abs. Every three months, he would switch to enormous dumb bells for exercises such as flying, incline press etc..

This strict routine culminated in a body that was ranked in the top ten in the world and he entered the Mr. Universe in 1957 being placed 2nd in the short mans class. James Bond actor to be  and bodybuilder : Thomas  Sean Connery , that John had trained was placed in the tall mans class. 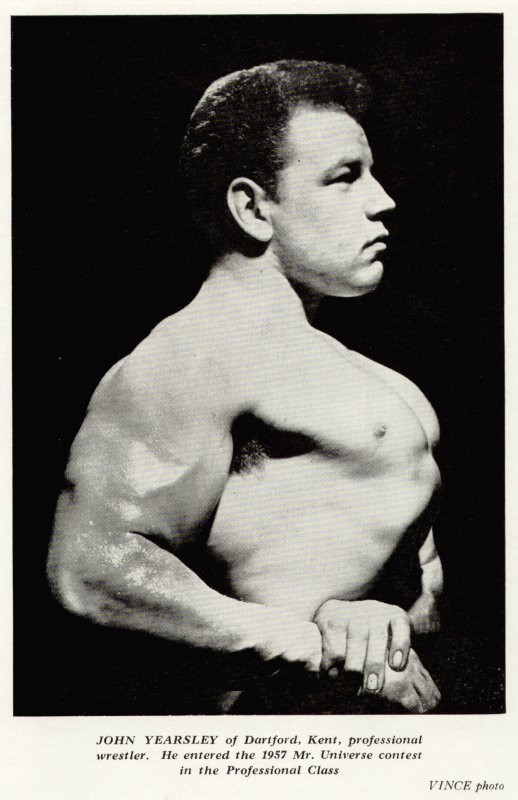 During these years, he often visited Professional gyms away from the farm life and there he befriended and trained with some of the Legends of the day such as Spencer Churchill who was to ultimately suggest a wrestling career, Sean Connery, Dave Prowse MBE and Billy Stevens at the Stratford gym, Reg Park, Paul Anderson, and many top physique men of that era. 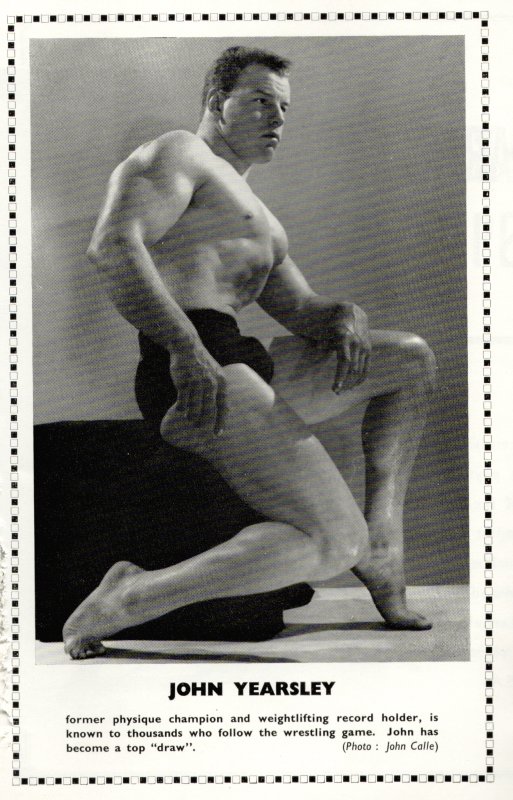 Now in his early twenties, the young giant took a job with a circus appearing as a strongman, where a ramp would be placed on his body and a car driven over his barrel chest,  which he enjoyed for three years before being lured into the job that would make him an International star : Professional Wrestling 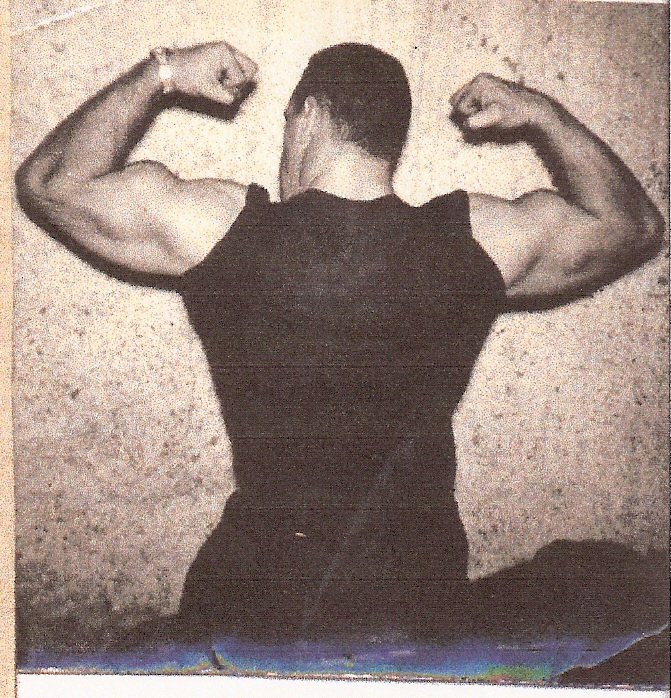 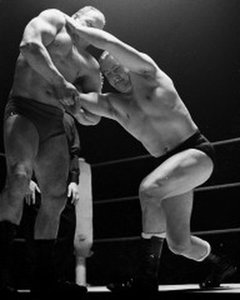 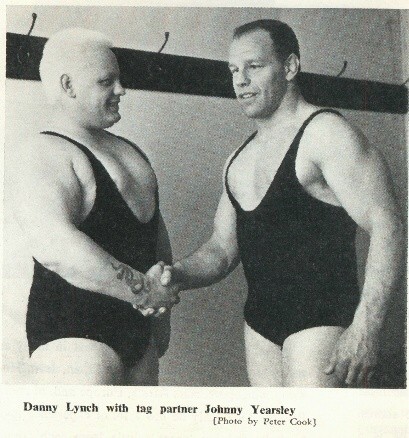 John turned Professional in 1953, having learned the basics at the ROFSA gym in Woolwich. His parents had bought a house in Bexley, where he resided next to Danson Park Lido and all his spare time was spent commuting between the gym and sunbathing at the famous outdoor pool. Here he met local bodybuilders and wrestlers  and was soon barnstorming around the Country causing chaos with his rule bending tactics. 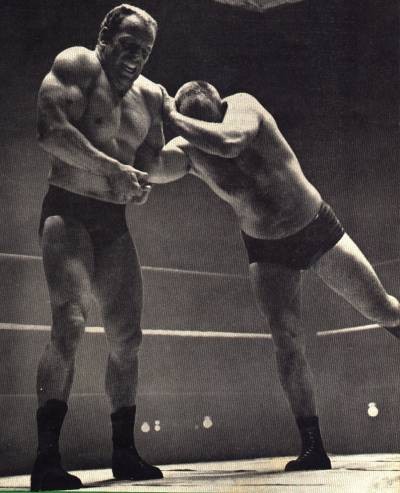 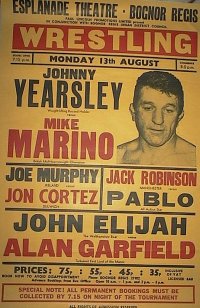 Eventually, he met a local Welling girl called Pat Holland and settled down to Family life, buying his first house in nearby locality to his beloved Mother and Father. The young couple gave birth to Sons Mark and then Carl, followed by Daughter Emma. He had always admired anything teutonic and that love of German influenced his thinking when naming his children. He had a German Dobermann dog called Lisa and drove a Porsche, before dropping to a Volkswagon Beetle in later life. 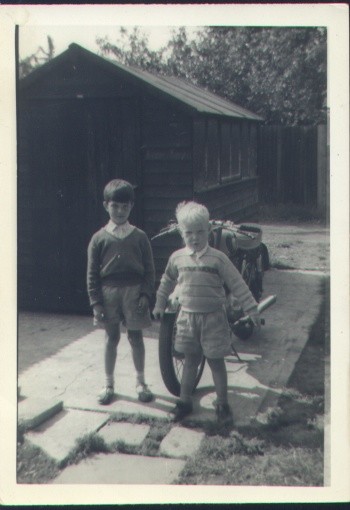 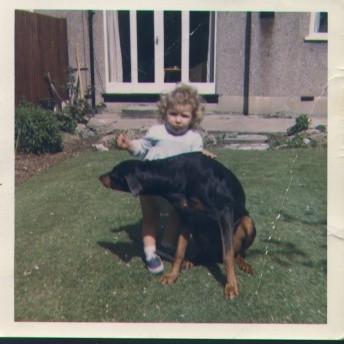 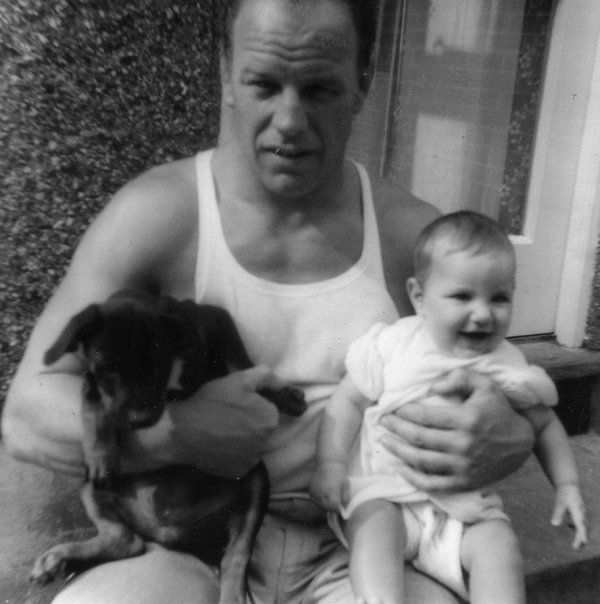 John’s image of a huge gladiator with a fierce face, actually belied his true personality which was one of impish and boyish humour, full of fun and quips, his lifestyle being that of elegance and opulence, with his home full of expensive artefacts from his many trips abroad. He had a deep booming voice that could bring a chill to any man, but was very quiet and thoughtful, often seen reading his beloved Bible with his glasses on. Every Sunday, he could be seen, walking to the Church where his parents still worshipped. Very reminiscent of the young Arnold Swarzenegger, he soon had the largest wrestling arms in the world with a girth of 22 inches at one point, and continued to hone his beautiful physique whilst travelling the globe destroying his opponents with those wicked fore arm smashes that he became famous for. He had no regard for rules and just wanted to get the bouts over as quick as possible then return home to his Family. At times, he seemed unaware of the hatred that the audiences felt for him and he could produce the utmost heat with just a grimace or snarl at them. Such was the effect that he had on these crowds, that in Beirut and the Lebanon, he had to have armed guards with machine guns to escort him back to the safely. 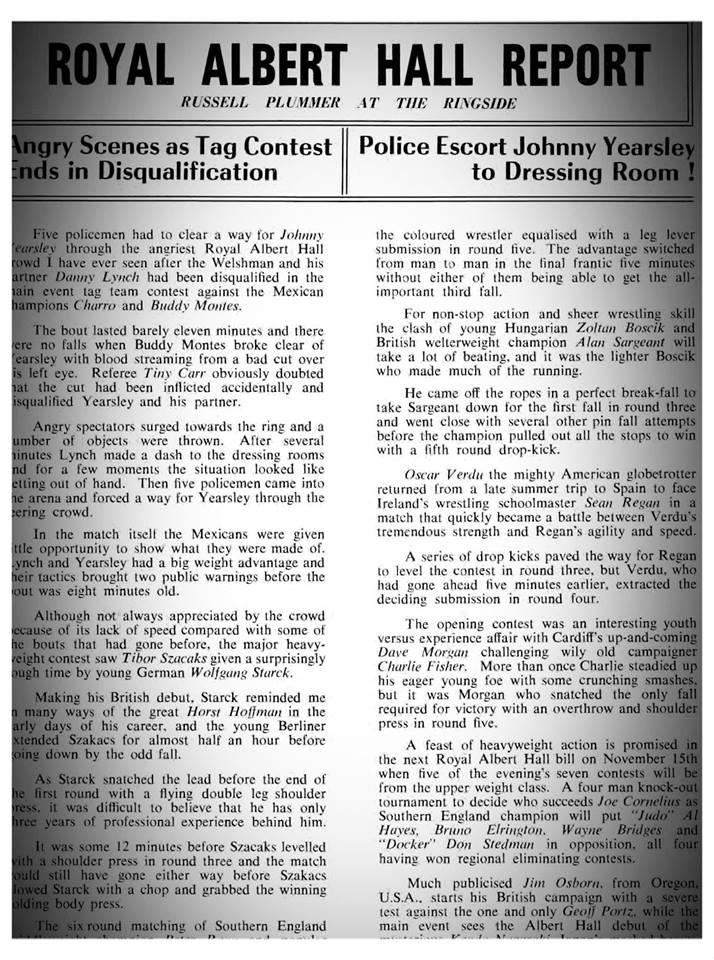 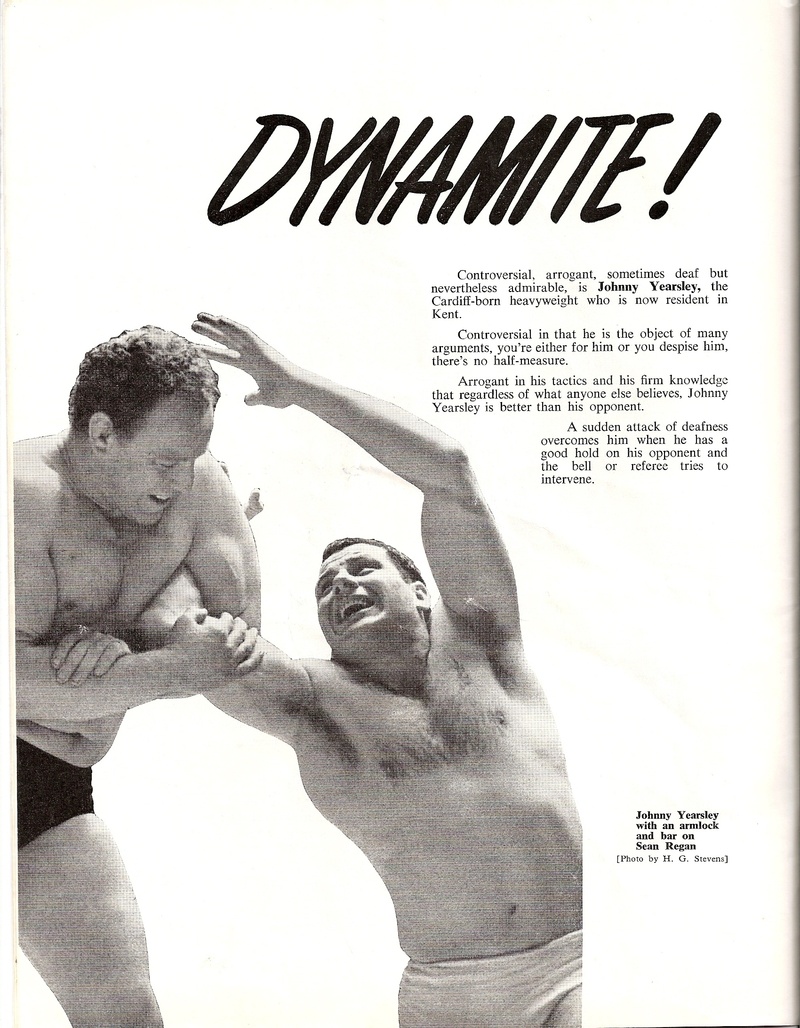 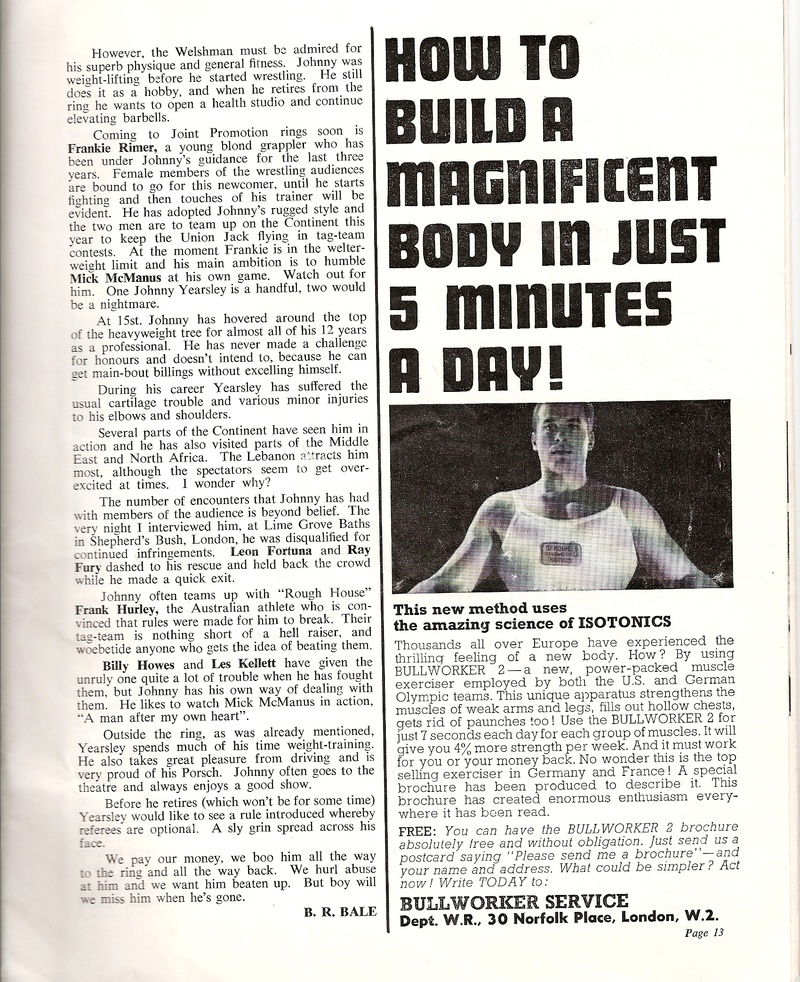 During the early 1960’s, thanks to his success as a crowd filler alongside his tag partner Danny Lynch, he bought a larger house in Bexley and soon built another gym in the garden, where he was able to work out with his many friends and fellow Legends such as  Henry Cooper, George Cooper, Wayne Bridges, Reg Reynolds, Bob Kirkwood, Leon Fortuna, Neil Sands, Doug Joyce, Charlie Fisher,  Dave Phillips, Ray Apollon, Dick Conlan, Joe Murphy, and would often play host to travelling International stars with George Drake the Catalina Comet, Billy Two Rivers, Sean Regan, Ivor Pat Barratt, being regular visitors to his spare room. 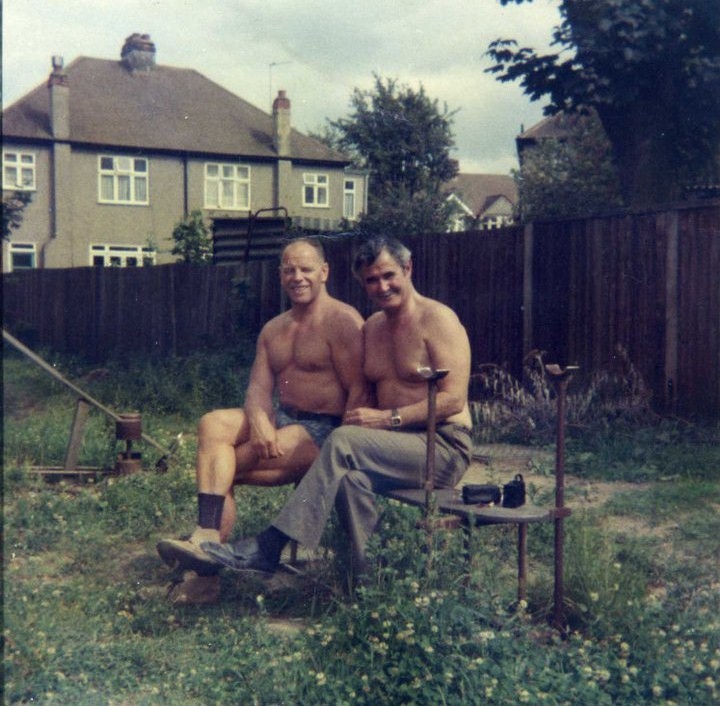 He won several titles during his rampage across Europe including  Southern area Heavyweight Champion, Kent all in Champion, and the Austrian heavyweight Championship in 1970. Trips took him to Africa, Middle East, Europe and many other Scandinavian Countries. 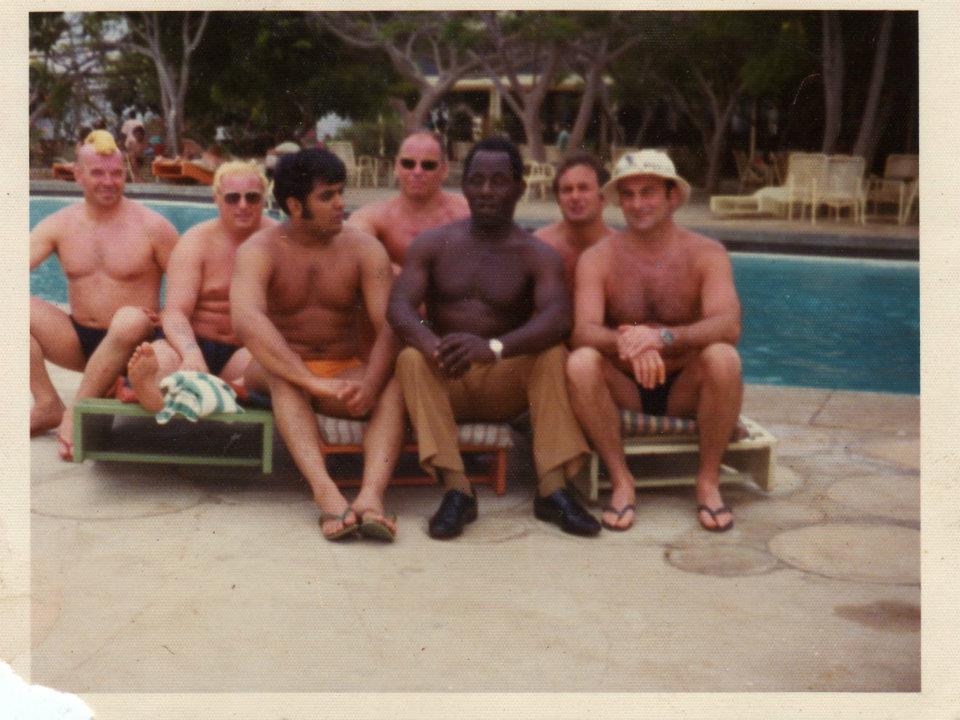 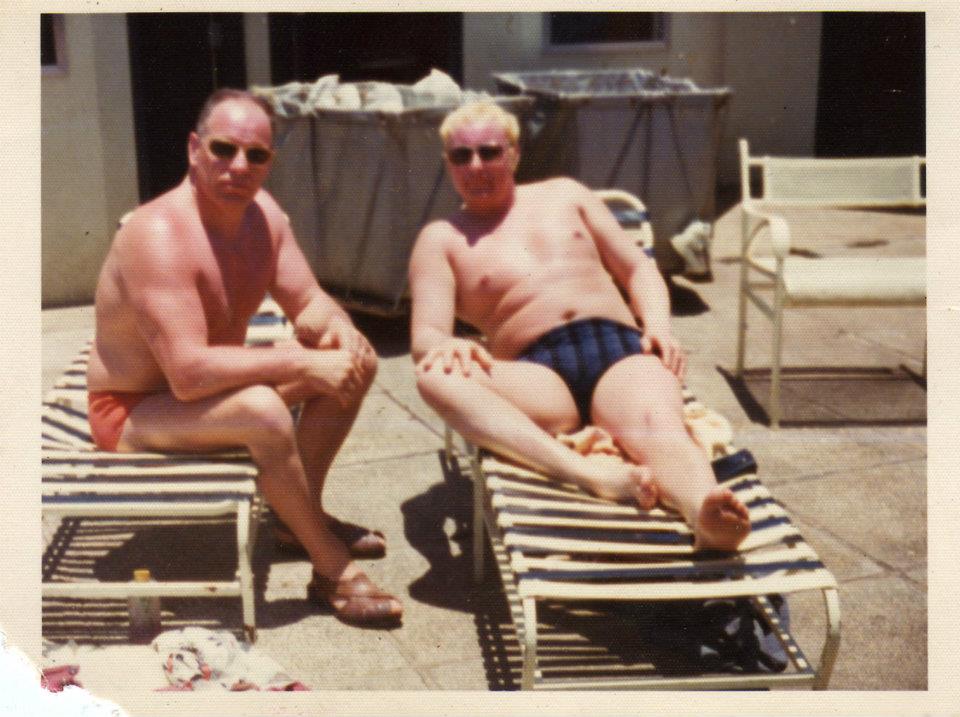 The competitive side of his weight lifting and bodybuilding now took second place to the wrestling and he retired from that side of life with a Mr Universe placing, 5 National Titles, and 23 further weight lifting titles plus a stint in the Guinness Book of Records . 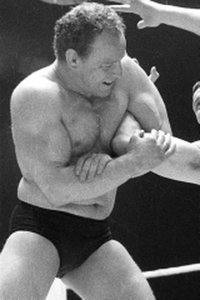 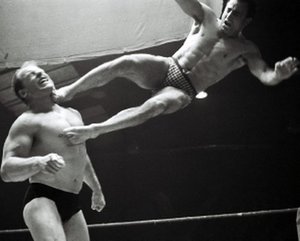 Television wrestling was now in full swing with the Nation being gripped every Saturday, making Yearsley a crowd favourite as someone they loved to hate just like Mick McManus, He revelled in the fame, and would travel to his favourite hairdresser/Barber in Wardour Street London to see Louis,and get his haircut before every appearance. This exposure at National level led to other booking s and he became a regular on the Dickie Henderson Show, along with former World Champion Boxer : Freddie Mills, plus appearing in movies and other TV shows such as Minder and Sweeney as a heavy , plus comedic roles with established favourites such as Les Dawson. 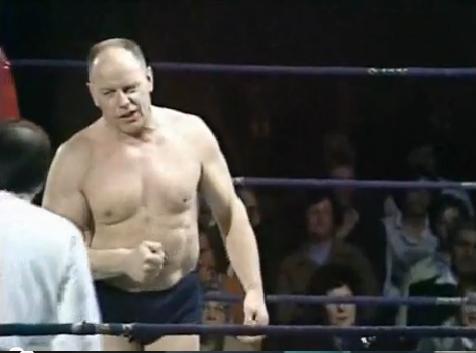 Away from the ring, he developed a passion for ballroom dancing, along with fellow wrestler and sometime tag partner Australian grappler : Frank Hurley. He joined a dance class above Burtons in Eltham run by former World Champions : Bill and Bobby Irvine, and immediately bought a suit , looking like the incredible hulk and scaring off most female dance partners before even getting them on the floor, but he persevered acquiring a bronze medal for proficiency whilst Frank obtained a gold. 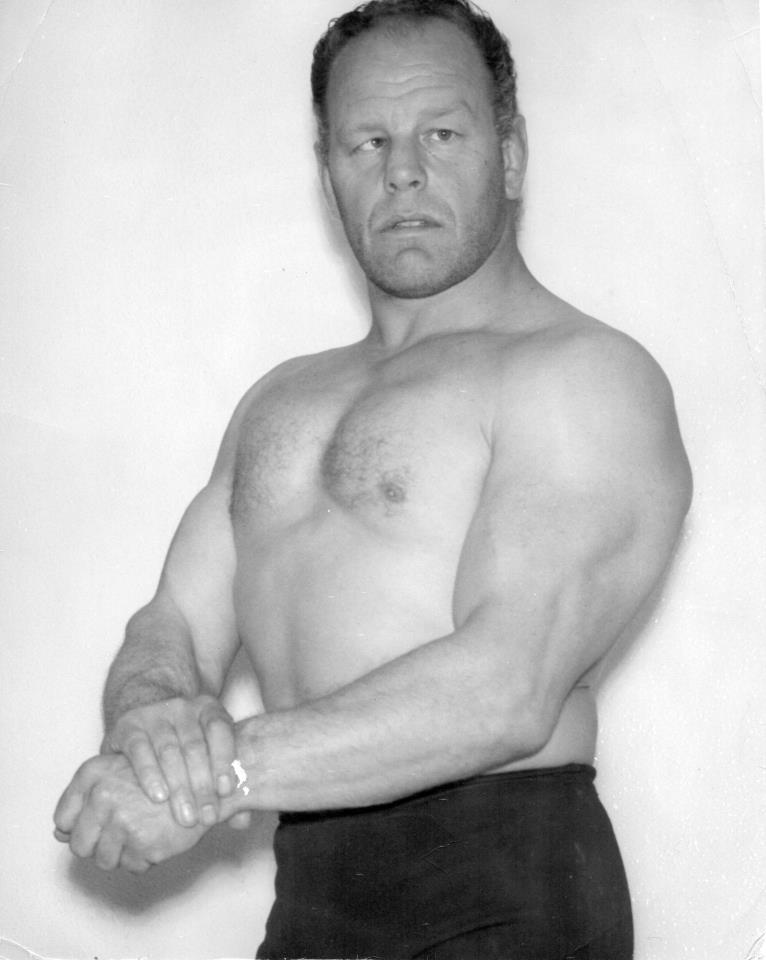 Another passion was classic cars , at one time owning an Austin Atlantic, one of only 100 in the U.K. which he sometimes drove with the drivers door missing !!  His great buddy Sir Alan Garfield would often drive over from his house in Beckenham in his great antique Bentley and the two of them would spends hours visiting shows or discussing the vehicles.

Sadly, his relationship with Pat ended and she moved to Belgium where she remarried, with heartbroken John eventually forming a new partner ship with local swimming Instructor Carol and her Son Stewart. 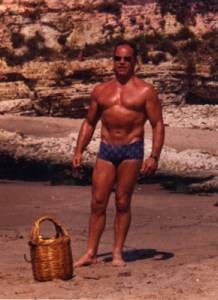 Simultaneously, he was introduced to Publican life around 1978 by friend and long term victualler Wayne Bridges taking a place called ‘The Fountain’ in Deptford South London, followed by the 'Kings Head'.

Life seemed good once again, but during the 70’s, he visited the Doctor for a health check and was horrified to learn that his heart had weakened from all the years of over strenuous exercise and the night when he broke the crucifix record had also broken ten tendons in his chest, exaggerating  the problem. John was devastated and began a ritual of very small workouts, strict diet to lose weight, walking and even had to sell his beloved Porsche in favour of something less pretentious. His wrestling became more sporadic as he turned down many long distance slap jobs and he was reluctant to bump on the floor quite as much as in his youth. 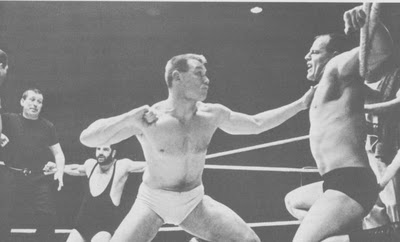 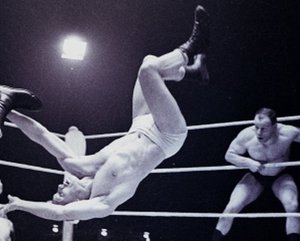 By 1979, he felt unwell and Doctors informed him that the years of dieting with just health pills like tissue salt tablets( around 200 per day), and the very purest of foods, left him with no ruffage and he was subsequently diagnosed with bowel cancer and taken into Queen Mary's Hospital in Sidcup for a corrective operation, but sadly passed away on the second of February 1980. We were informed that it wasn’t the cancer that killed him, but the strain on his heart was just too much for the gentle giant. He was just 50 years old. Such was the respect for this great man, that over 200 wrestlers attended the funeral at his favourite Christadelphian Church in Erith, with burial in Sidcup Cemetry at Footscray Lane. 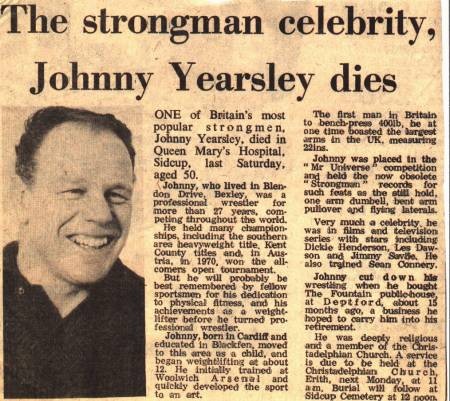 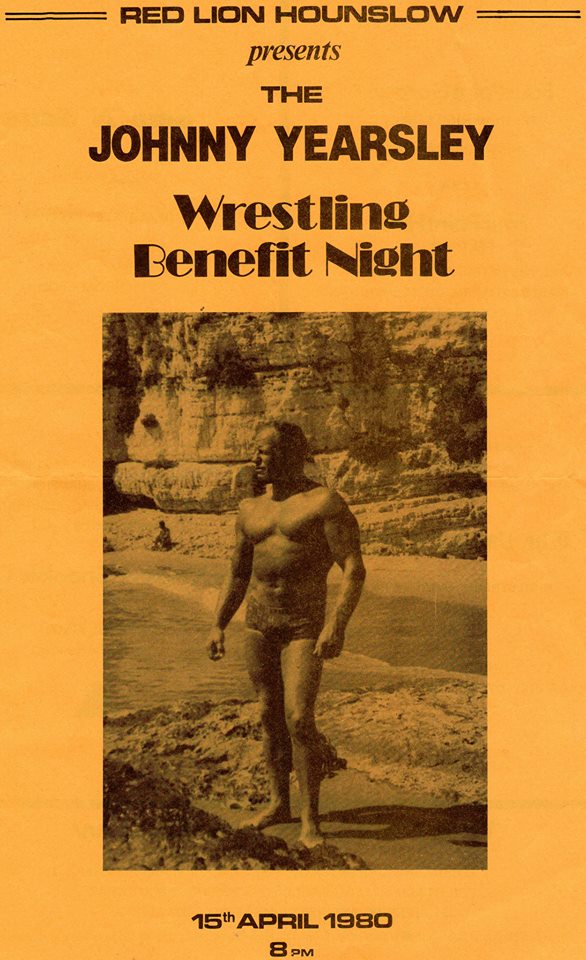 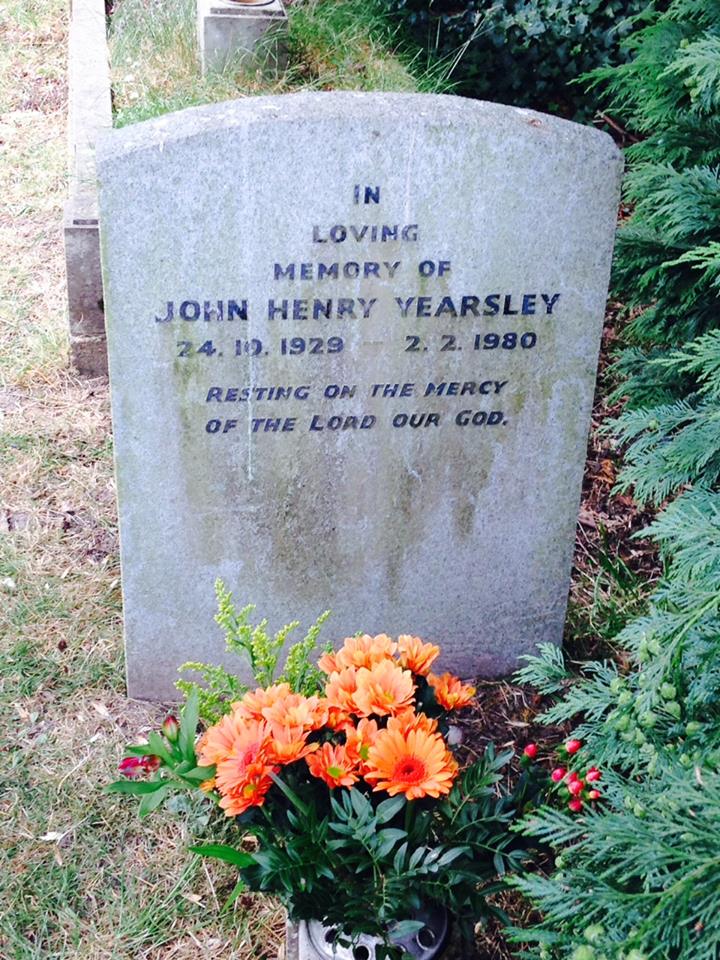 John Yearsley will be remembered as not only one of the strongest men in the world, but as a master villain in his chosen career, second only to the late great Don Mendoza. His charisma, elegance, quirky humour and boyish charm was second to none and he is still sadly missed to this day, by all who knew and loved him.