Johnny Kincaid was born on the 4th June 1945 in Battersea, London, a long way from Barbados where according to the wrestling promoters he hailed from, infact a place that he had never visited.  John was taken to his first wrestling match at the Wimbledon Palais by Eric Sands, a popular welterweight at the time and from that moment on he never looked back regularly attending shows and meeting the stars of the day, at this time Johnny never thought that one day he would be the 'star of the show'. Johnnys in ring career started not as you might expect with wrestling but as a boxer leading him to be a regular at the boxer and wrestling booths that were popular at the time at the fairground.  This was to be Johns start in the business and he was very eager to become a star and become a household name especially as this was at a time when television wrestling was just coming into its peak.   Initially John tried his hand at amateur wrestling joining the United Amateur Wrestling Club in Stockwell, near Brixton but after a few sessions decided that the amateur style was not for him.

On the 16th July 1963 a young, fresh faced Kincaid entered the ranks of professional wrestling for the very first time when he climbed into the ring at the Dulwich Baths to take on Johnny Hurley.  This was Johnny big break and at the end of the match he felt as if every bone in his body had been broken, although he was defeated and left the ring battered and bruised it did not deter him, he enjoyed the experience and knew that he had found his vocation, he was determined to be a professional wrestler. (Johnny Kincaid poses for the camera)

John was very eager to learn and was often seen in the gym and in the ring before shows training and learning new holds, he wanted to be the best he could and nobody was going to stop him from achieving his goal.  At this stage John was yet to reach the big time, television appearances were a long way off and he continued to wrestle during the week for various smaller independent promoters throughout the country whilst boosting his income by going back to the boxing and wrestling booths at the fairgrounds during the weekend.   Johnny was wrestling an awful lot at this time and it was starting to take its toll on his body but ever determined he carried on knowing that if he were to make it big he would have to go through the pain. Johnny knew that to become a star to gain television exposure he would need to join the ranks of Joint Promotions, the largest and most powerful promoters the UK have ever seen.  Johnny visited the offices of Dale Martin Promoters in Brixton where he met with Jack Dale who had had a reputation as a tough hard nosed wrestler in his day and was purported to be even tougher as a promoter.   Johnny told Dale that he had had five years experience as a professional wrestler and was ready to join Dale Martin Promotions, however Jack Dale had other ideas and told Johnny to go away and get some more experience, this was somewhat of a shock to the young Kincaid and he left with his tail between his legs although in a positive mood, at least he had not been told never to come back.

A chance encounter with Mal Stuart led to Johnny first taste of wrestling abroad.  Mal was due to go on a trip to Greece but his partner had pulled out and Mal suggested that if Johnny could persuade the promoter to allow him to go it would be great experience for him.  Johnny, in his own style did just that and was soon on his way to Greece.   Johnny spent four weeks in Greece during which time he met many of the great wrestlers of the time and gained invaluable experience.

On his return from Greece Johnny went t see Jack Dale, on this occasion he received a positive response from him, his tour of Greece had paid off, Jack was impressed and signed Johnny to wrestle for Dale Martin Promotions, at last Johnny had made it to the big league and he was going to ensure that he made the most of it.   A week later Johnny had his first match for Dale Martin in Salisbury,  he was in awe as he entered the dressing room to see the likes of Mike Marino, Steve Logan, Bruno Elrington sitting there, these were the stars of television wrestling and Johnny was now to be a part of this, his dream had come true. (Johnny KIncaid attempts to remove the mask of Kendo Nagasaki)

Johnnys first match in the major league was against one of the biggest names of the day in Jackie Pallo.  Johnny faired well in the match despite losing by two falls to nil.  It was to be another 4 weeks before he had his next outing for Dale Martin where he teamed with Harry Kendall to take on Ivan Penzecoff and Jimmy Ryan in an entertaining bout at Great Yarmouth.   It had taken Johnny six years from his first professional match to becoming a regular for Dale Martin but at last he had made it.

In October 1969 Johnny achieved one of his goals when he was given the opportunity of his first televised bout against the biggest name of them all, Mick McManus and whilst Jonnny was defeated in the match it was the start of him becoming what was later to be a household name in the business.

Johnny continued to wrestle around the halls, he now had not only regular work but was also becoming a regular on itvs world of sport programme and was taking on some of the biggest names in the sport.  Fame was now arriving which opened up doors for Johnny, it meant more foreign trips and he travelled to Sweden, Germany, Israel, India, Belgium and back to Greece where he was now a star and was being matched in some of the shows biggest matches even winning the prestigious German tournament in 1982 and as well as returning to the UK and wrestling up and down the country. Back in the UK Johnny was known as a singles wrestler but he had on occasions competed in tag team competition teaming with the likes of Johnny Kwango and Honey Boy Zimba, however it was to be Johnny next tag team partner that was to be the next stage of his career when the promoters teamed him up with Dave 'Butcher' Bond.  Not only was this to be Johnnys most famous tag team combination but it was to be the first time that he was to hear the boos from the crowd instead of the cheers and so the Caribbean Sunshine Boys were born.  Right from the outset the team achieved what they wanted and their first Albert Hall appearance against the Kung Fu Fighters is legendary. The team is still known as one of the most disliked in the history of professional wrestling and on many occasions would cause near riots in the halls, even to the extent that fans would start fighting at the halls just to get to the pair.   After 11 months the promoters had to disband the team as it got to the stage whereby the police and hall managers were concerned for the safety of the fans when the team appeared. With the tag team no more Johnny returned to singles competition, he was now a popular wrestler around the UK and one of the many that went on regular tours right around the World having a great deal of success.  In 1981 Johnny won the European Heavyweight title which he successfully defended on a number of occasions.  However, despite the fact that Johnny loved the wrestling business it was taking its toll on his body and he knew that sooner or later the wrestling business would come to an end and knowing that he would need an income at that time Johnny, like many other wrestlers, went into the licencing trade and soon was granted a licence to become Landlord of the Bow Bell Public House. During this time and since Johnny had taken over a number of Public Houses and has made a decent living from it. 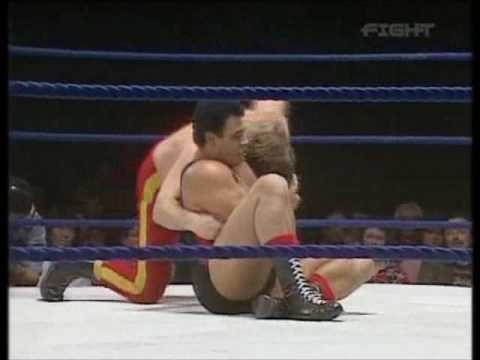 Johnny continued to wrestle around the World until 1986 when he decided that it was to be the final bell for him as far as his wrestling career was concerned.  His final televised match came on the 15th March 1986 from Hertford when he opposed the World Mid Heavyweight Champion Marty Jones for the title.  Unfortunately, Johnny was defeated by two falls to one but on reflection of his television career he had started with Mick McManus and ended with Marty Jones, two of the best and he couldnt ask for more. 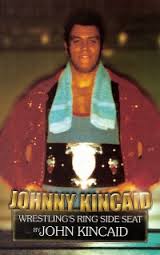 In retirement Johnny continued to run his public houses and also became an author writing two books titled Johnny Kincaids Wrestlings Ringside Seat and From International Wrestler to Pubs and Punters.  Both of these books are available from this website via our webstore. Johnny Kincaid still takes an active role in the wrestling business today, he is always happy to attend training seminars to pass on his expertise to wrestlers of the future and has always been a keen supporter of the Reunion.  In November 2013 Johnny was offered the opportunity to join the Reunion as an Associate Committee Member which we are very pleased to say he accepted and now heads a sub committee to decide who gets inducted into the Hall of Fame.  We would just like to say that Johnny himself did not feel worthy of being inducted himself into the Hall of Fame but we feel that he more that justifies his place here and he has been included on the request of former World Heavyweight Champion Wayne Bridges.