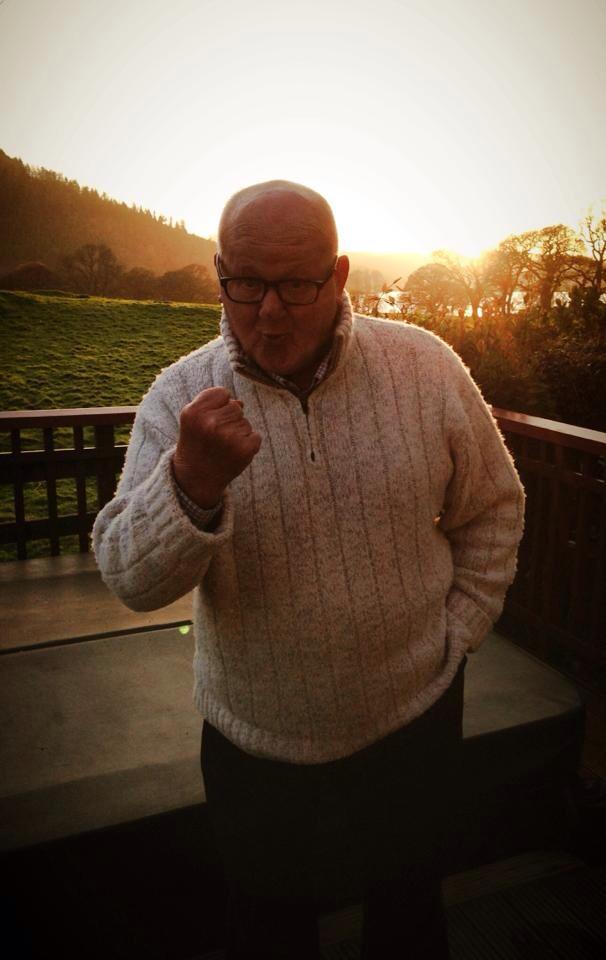 Charlie Glover's boxing and wrestling gym in Barnsley was a place where a man could change his personality literally.

One man who joined Charlie's troupe of sporting enthusiasts was a coal miner by the name of Jack Land. Jack's interest was in boxing, which he had begun to learn whilst in the army during his National Service. Returning to civilian life and working down the pit Jack joined Charlie's gym to pursue his interest. Jack was in the boxing gym upstairs whilst the wrestlers trained downstairs. Amongst them were Sam Betts, Harry Bennett and Brian Glover.  One day Jack was invited to join the mat men. It was a life changing moment and the gloves remained unused from then on.

He emerged from Glover's gym proficient in a different sport, with a dual personality and new nationality as one of wrestling's greatest villains, Germany's Karl Von Kramer.  Jack was a mid twenties thirteen stoner when he made his professional debut in 1957. It was the start of a career that was to extend more than thirty years, with promoter Les Prest telling us he employed Jack in 1988, and he was still going strong four years later when he was the opponent of his good friend Pedro the Gypsy, in a bout which was Pedro's last.

The abolition of the Entertainment Tax in 1957 prompted Charlie Glover to start promoting professional wrestling shows. At a stroke he was able to provide work of the men training at his gym, not just Jack Land, but others that included Pedro the Gypsy, Dwight J Ingleburgh, Stoker Brooks and, of course, his son, Brian. All of Charlie's protégés had learnt the trade well, and Jack was soon working for various opposition promoters such as Max Crabtree, Paul Lincoln and Jack Taylor. 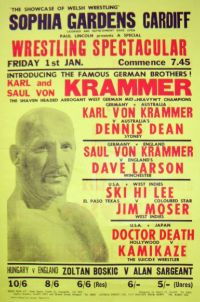 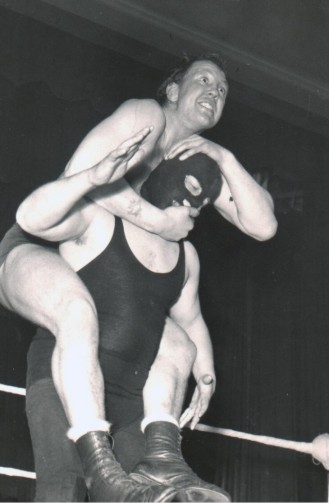 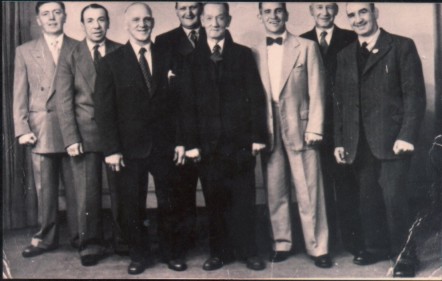 Even without the aid of television, which in the late 1950s was popularising wrestling throughout the nation, Karl Von Kramer was a name that quickly became well known amongst wrestling fans. Fans were enraged by his tactics, acknowledged his wrestling ability and appreciated his willingness to travel the length and breadth of the country seven nights a week. Unsurprisingly he was at his best when he opposed the opposition heroes of the day, men such as Chief Thunderbird, Bobo Matu, Max Crabtree, Blackburn Roberts and Judo Al Hayes. Probably his most regular opponent was  fellow protégé from Glover's gym, a man who entered as Barnsley's Sam Betts and emerged as New Jersey's Dwight J Ingleburgh. Sam and Jack, both men who knew how to rile a crowd, must have wrestled each other dozens of times around the country. 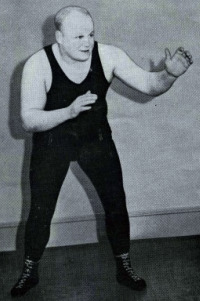 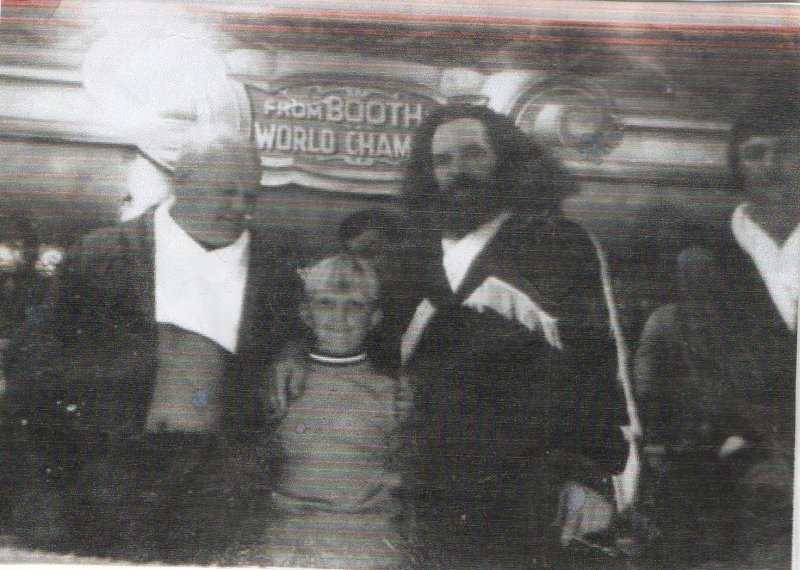 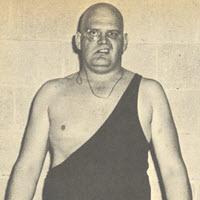 In the early 1960s Jack was approached by Joint Promotions and began to work for them under his own name, Jack Land, as well as continuing to use the name Karl Von Kramer on occasions. Working for Joint Promotions brought a new set of opponents, men with a much higher profile in British wrestling - braving the fans by facing their favourite Andy Robin in Edinburgh, popular Peter Maivia, internationally renowned Alan Garfield, ballet dancing Ricky Starr and Mr Universe Earl Maynard. We could go on and on, because between his two personas Jack had a style to suit just about everyone. His services were greatly in demand and Jack moved frequently between Joint Promotions and the opposition, which may explain his lack of television exposure. On occasions he even had a third person, the masked Red Devil, a character created in the 1930s by his mentor Charlie Glover. It wasn't just in Britain that Jack was in demand, making numerous visits to Europe and wrestling in Sweden, Spain and France.

When we met Jack a few years back he told us that he preferred working for the independents because he enjoyed working and travelling with his good mates Pedro, Sam, Butcher and the other Barnsley lads, and the pay was better. Working for the opposition also allowed Jack to supplement his income further by promoting his own shows, with Max Raeger telling us he made his debut on one of Jack's shows in Birmingham. 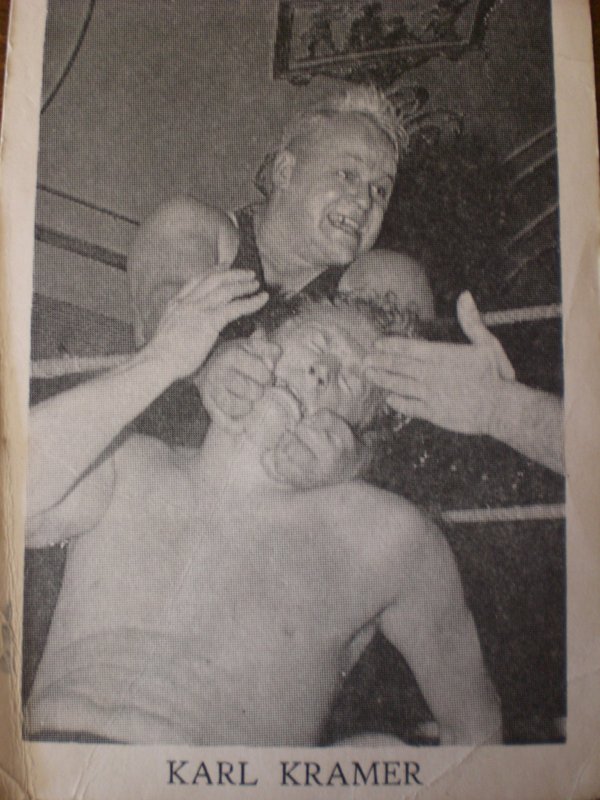 Working for the independents or Joint Promotions as Jack or Karl, fans were assured of good value for money, right up to the day he fought his last fight, in 1992.

Retirement wasn't the end of the story for Jack Land. In 2009 Jack's colourful life was the inspiration for the stage musical "Grappling" which told the story of a Yorkshire miner who turned to wrestling to support his family during the 1979 miners strike.

Jack Land was one of wrestling's great  Barnsley characters who passed away, aged 85, on 30th June, 2015.

The British Wrestlers Reunion thanks the Wrestling Heritage for the preparation of this great tribute to a true and gifted Legend also to Jack's devoted grandson : Jack Land Noble who has written a poignant testament to his Legendary Grandfather. My friends, for someone who seems to churn out material by the bucketload, this has proved to be the hardest piece of writing I've ever composed. To find the right words to describe my thoughts and feelings at this most cruel moment in time has proved impossible.

How do you fully describe the greatest man to ever draw breath? A man whose life lasted for 85 years - but who lived the lives of 20 men. A man who never followed the flock. A man who lived life by his own rules and would never suffer fools sadly. A man so universally loved, admired and respected. Well, here goes...

On Tuesday 30th June 2015 at 12:15pm, the world lost one of its finest sons - my Granddad: British Wrestling Legend and Barnsley Sporting Hero, JACK LAND.

Lovingly known to all as ‘German’, he was born in Grace Street Barnsley on 1st April 1930. But wrestling wasn’t the only string to this versatile sportsman’s bow. Football figured largely in Gramps' early life, having its origins in the Racecommon Road School team in Barnsley where he made a name for himself in goal. After school, he worked at Monk Bretton and Darfield Main pits where boxing became his second sporting love, holding the National Coal Board Middleweight championship three times. He bid farewell to mining just as His Majesty’s armed forces claimed him for National Service with the Duke of Wellington’s Regiment. For a time he was stationed in Minden Germany, where he won the British Army Middleweight title.

Then shortly after leaving the army in 1952 he was invited for trials with Sheffield Wednesday, going on to goal keep a number of games with their ‘A’ team – not an easy feat for a lifelong Barnsley FC supporter!

The swing to wrestling came at the now demolished Junction Inn Gym, Barnsley. Gramps would often join in with impromptu wrestling sessions, soon switching from upper cuts to Full Nelsons. He had his first professional bout in the late-1950’s and had a glittering forty year international wrestling career to his name – or rather under his alias KARL VON KRAMER. Widely acknowledged as one of the finest bad guys (or 'heels') to grace the wrestling circuit, he finally retired from the business in the early 2000's.

Then, in 2010, I was blessed to bring his life and career to the stage, when I wrote, composed, directed and acted in ‘GRAPPLING' (the world's first wrestling musical!) It played to full houses at Barnsley's Lamproom Theatre. The comic source material was in abundance. From an early age, my Granddad would entertain me with the most colourful anecdotes, from his times on the road with tag-team partner Brian Glover, to the drinking sessions at Scarborough Spa with Tommy Cooper, East End wrestling engagements for Ronnie and Reggie Kray ("perfect gentlemen") and travelling all around the globe doing what he loved and did best. It’s often been said that my Granddad couldn’t walk down a back street in Hong Kong without someone shouting, "Ayup German!" But was Gramps proud of the show written in his honour? You bet he was! He choreographed the show’s high-energy finale and was with me every step of the way in turning his amazing life story into an entertaining and critically-acclaimed work of theatre. Seeing him take a full standing ovation from the audience on the last night and signing countless autographs afterwards is something I’ll always cherish.

A loyal husband of 62 years to my beautiful Nannan Betty, a wise and loving father to John, Betty and Karl, a tirelessly caring and supportive grandfather to Deborah, Jack, Samantha, Jessica and John Lewis, a 'chuffed' great-grandfather to Melissa and Ryan, a proud brother to his late siblings Dennis, Edna, Harold and Olga and surviving siblings Fred, Peter, Hilda, Winni and Alan... and a friend and mentor to ALL who crossed his path.

Alas, Gramps was failed by Barnsley District General Hospital. If you've had a good experience under their care - then good for you. Unfortunately my Granddad didn't. From water infection to pneumonia in two and a half weeks? Warning signs were ignored despite the constant concerns we voiced. Ultimately, a patient's mobility appears to be a systematic afterthought and his treatment was delayed. Thank God my Gramps never lost his unique sense of humour. I guess he was too much hard work for them and not a docile weakling toeing the medical line. He certainly gave them a run for their money!

At 85, he was still fighting fit and ready for action. Oh no my friends, this was never on the agenda. Gramps' departure was a truly unexpected but unbelievably graceful and dignified final curtain. No strain, no struggle - just one last big yawn. I'm so blessed to have shared these final moments with him (a time I'll forever hold dear to my heart)

Heaven's gain is our heartbreaking loss. Words cannot describe how we feel - it's both surreal and infuriating - but, as Gramps would want, the show must and will go on.

Oh yes lads 'n' lasses, Jack 'German' Land enjoyed a life reserved for very few. His was a rare and precious gift - to bring sheer joy into the hearts of thousands. A worldly, charitable and consummate showman with an eternal heart of pure gold, he was and always will be my idol: a true Barnsley Sporting Hero and British Wrestling Legend who leaves behind the most remarkable legacy.

But most of all he was my Granddad and, Lord, am I proud to be his Grandson. G'night owd lad... from Your Little Chickadee X

JACK LAND'S FAREWELL & CELEBRATION OF HIS LIFE' will be on Wednesday 22nd July. Full details will follow shortly]