Hailing from Freetown, Sierra Leone, but making his home in Manchester, UK Honey Boy Zimba was a popular wrestler throughout the 1960s,1970s and 1980s taking on many of the top wrestlers in the middleweight bracket right up to the heavyweights.

Zimba first entertained the crowds using the ring name of Nigel the Warrior, a name that has been long forgotten by the fans, but was soon rechristened as Honey Boy Zimba, a name which was not only a great improvement on his original ring name but a name to which he is still fondly remembered for today.

Zimba had succesful tag team partnerships throughout his career with the likes of Ezzard Hunt, Lenny Hurst and then Masambula where they were known around the halls of the UK as The Black Knights.  Zimba would enter the ring where he would do his routine war dance before his bout would commence.

Honey Boy Zimba was a very skilful technical wrestler and for a man of his size could deliver a lethal dropkick much to the surprise of many first time fans who did not expect to see a man of Zimbas size executing such a manoeuvre.  Zimba also had a very effected headbutt move seconded only by that of Johnny Kwango. 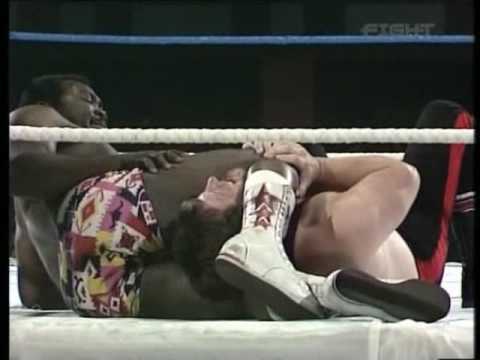 Zimba made many appearances at the Royal Albert Hall, the mecca of professional wrestling at the time, whereby he defeated the likes of Ray Thunder, Johnny South and Johnny Czeslaw although was not quite so lucky against the super heavyweight Mal 'King Kong' Kirk. 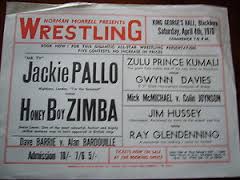 Honey Boy Zimba made many appearances on itvs world of sport but one of his most memorable matches was when he teamed with Dave 'Butcher' Bond to  take on the mightly team of Giant Haystacks and Mighty John Quinn.  Unfortunately, the team of Haystacks and Quinn were as one might expect a little much for the two lighter men to endure and despite their best efforts the match was stopped by the referee as he did not feel it was in their best interests to continue with the bout.

Zimba was highly respected by his fellow professionals and many a story can be told of their drinking antics after the matches.

On his retirement from the ring Honey Boy Zimba continued to run his public house in Manchester but sadly passed away in 1999 much to the dismay of not only his friends in the business but also his army of fans.