DAVE BOND GETS MAGNIFICENT SEND OFF 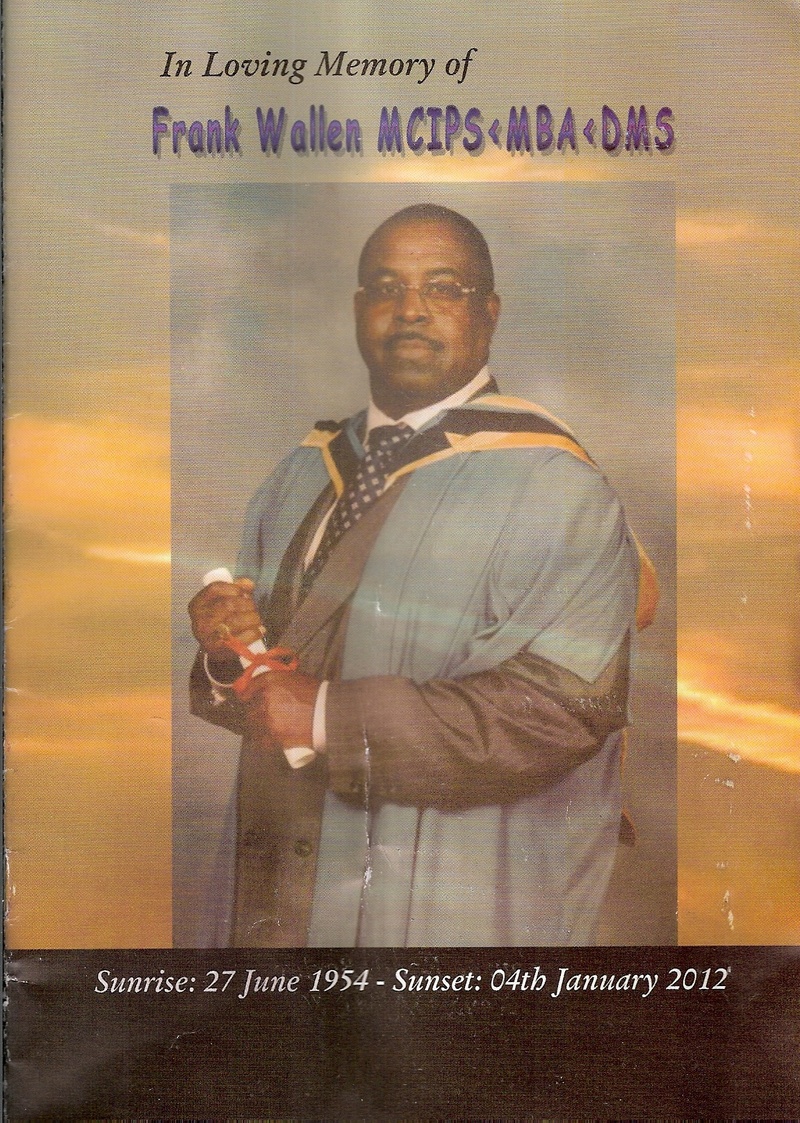 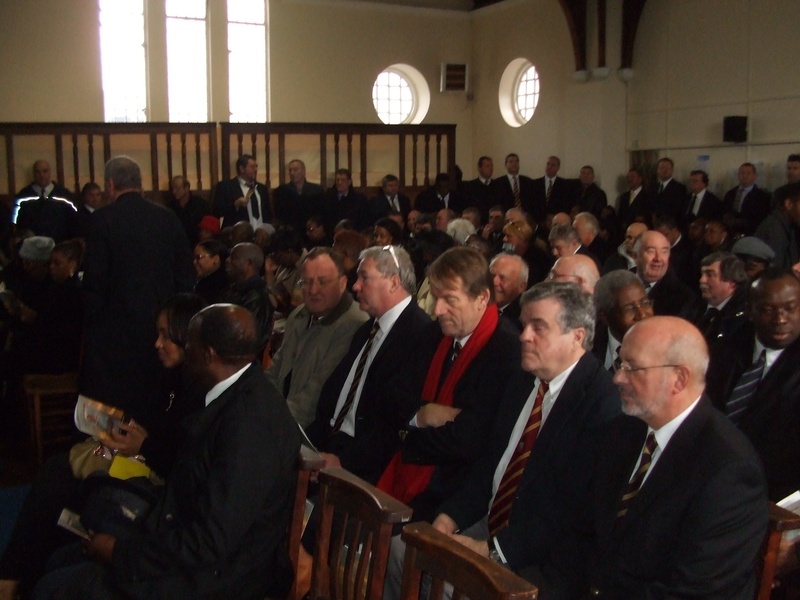 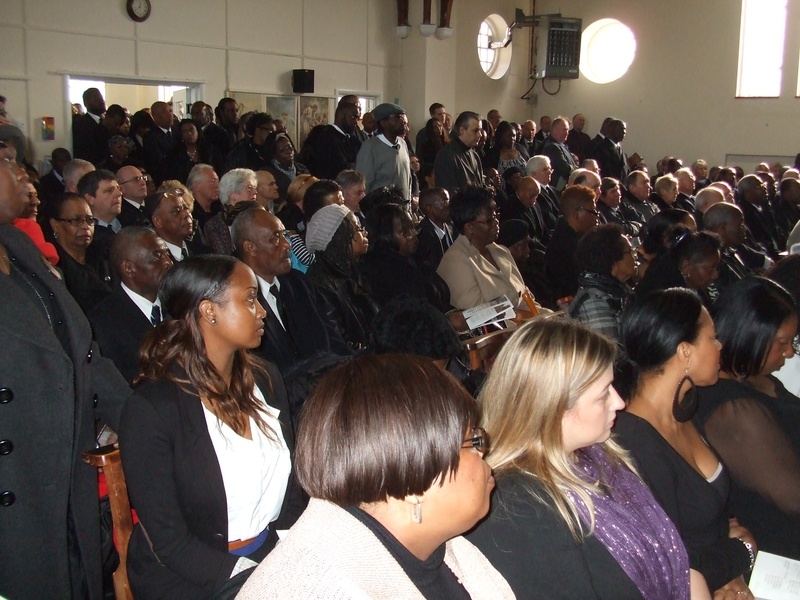 A mind blowing 700 mourners including many wrestling stars turned out to celibrate the life of the Legend that was DAVE 'BUTCHER' BOND. The church in Bellingham near Catford was heaving from the amount of people from all sections of the community, who came together in perfect harmony to honour this very rare human being. One wrestler  jokingly remarked that it was a shame they couldn't draw a house like that in life. The photos above just show the back wall of the church to give the reader some idea of the huge congregation. The rooms outside were also full to capacity as was the nave and alter areas, together with the side naves.

At widow Loretta's request the ceremony was conducted in lighthearted style with singing and tributes that often included humerous anecdotes from the life of the wrestler born FRANK WALLEN.

The cortege arrived to the sounds of BOB MARLEY singing 'Don't worry about a ting', followed by tributes from his two eldest Sons, that were full of humour. The beautiful hymn ' How great thou art' made famous by ELVIS PRESLEY followed  and then there were many more tributes including the speech below read by WAYNE BRIDGES,which received both laughter, sighs of tenderness  and tumultuous applause . There was organ recitals, live singing to piano accompaniment, a trio of beautiful singers,and a solo from Dave's piano teacher.Other speeches depicted his very full life as a judo expert, wrestler, civil servant with a degree, rugby player and coach, cricket organiser, and member of the Sunday club, whereby old friends met regularly to drink and talk.

What was apparent to all who attended, was the unconditional love felt for this man by so many, not because he was a TV wrestler, not because he was an International amateur wrestler, not because he was a great rugby star or cricket expert, but because he was FRANK WALLEN
The highlight for the congregation was when the lid of the coffin was removed for the mourners to walk past Dave and say their private goodbyes with a touch, kiss, or whatever was felt. This is a long standing West Indian tradition and was beautifully done in a poignant but cheerful manner. Johnny Kincaid  fondly said as he walked to bid farewell to his tag partner and life-long friend, 'When I walk past, I hope that I don't tag him by mistake' The sort of humour that Dave Bond would have cherished. 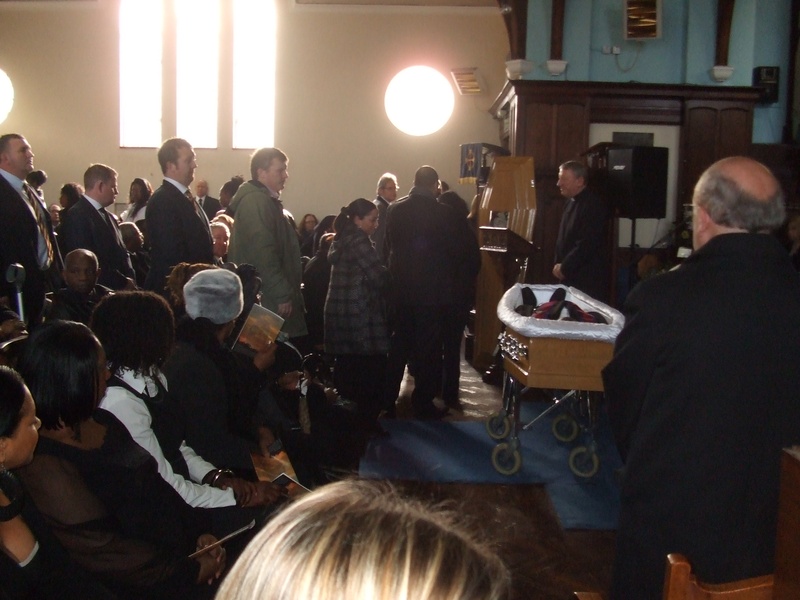 On arrival the hearse was late due to traffic which made the service almost 2 hours long, but nobody made any fuss or remarks , treasuring every moment instead.

Burial was conducted down the road and with the vast amount of followers, the procession blocked the streets that surround the church.

All in all, a fitting send off to a truly remarkable man, and of all the sad funerals that we have to attend, this  service was the most beautiful that I for one have had the privilege to attend. The whole proceedings were filmed inside the church and we have been promised a copy  DVD for those who wish to see the full service . A full list of wrestlers in attendance is included in the speech below. 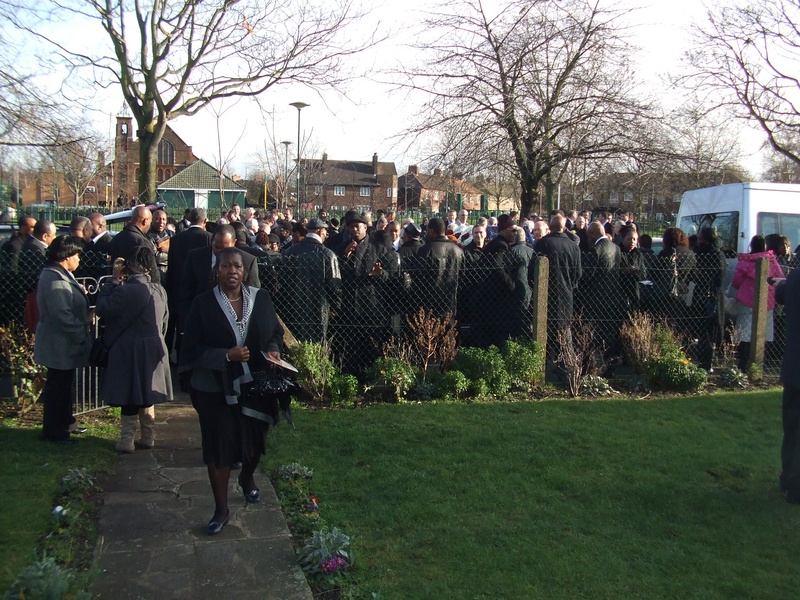 ( All photos are shown with the kind permission of Dave's widow : Loretta Wallen and the Family )

Ladies and gentlemen, We are all gathered here today in a common cause, to celebrate the life of  FRANK WALLEN, civil servant, scholar and academic, rugby enthusiast, judo expert,sports coach  and general nice guy, taken from us much too early at just 57,except that in the case of me, my colleagues, and the wrestling fraternity world wide, he was known as the International Professional wrestling star : DAVE 'BUTCHER' BOND, and it is that aspect of his life that I would like to honour and that name, which with your permission, I shall use.

My wrestling name was WAYNE BRIDGES, and I am here today, representing the British Wrestlers Reunion and as a friend of this great man, together with many of my former wrestling colleagues, who wish to pay tribute to this legendary athlete that was known to his friends as  ' BUTCHER' , a name that was a complete contradiction in terms, to the man we all knew and admired.

Like most of us, he started his career  as an amateur wrestler, training at the United Club, where he learnt the art of 'catch as catch can' wrestling. Having worked his way through the ranks to represent his Country at the Commonwealth games, he eventually wanted to join the rest of us as a Professional wrestler and started training at DALE-MARTINS gym in Brixton, alongside other new boys such as LEE BRONSON and  MARK 'ROLLERBALL' ROCCO. The three hopefuls soon  became firm friends which lasted throughout their careers, and Rocco has sent apologies today for his absence, as he lives in Tenerife, but asks that I say 'Dave Bond was not only a great wrestler, but the cheeriest, kindest and nicest chap I ever met, and will be sorely missed. I loved him dearly'.

Frank worked for the Government and was worried what the Bosses would think of him being a wrestler. At that time, he was speaking  about this concern with referee : JOE D'ORAZIO who also worked in Dale-Martins office, at a time that corresponded with a new Bond movie being released, so Joe came up with a brainwave and jokingly called him BOND- DAVE BOND  003 ½. This coupled with the  rough tough rule bending tactics that he adopted, gave him the nickname ' BUTCHER' , the rest is of course history.

He was in constant demand as a heavyweight and pretty soon another Legend in the form of JOHNNY KINCAID , who is here today, soon paired up with him to form the great tag-team called the CARIBBEAN SUNSHINE BOYS, and although the partnership only lasted a year, their friendship endured throughout their lives and  fans to this day, still quote those memorable bouts. Another athlete and friend of that era who wishes to add his condolences is pal : LENNY HURST , speaking from his Florida home.

The next 20 years were kind to this great grappler, topping the bill everywhere he appeared, with many TV appearances and trips abroad to Countries like Dubai, Zimbabwe and Beirut in the Lebanon. It was while on one of these tours that his awesome humour came out. Great friend and fellow wrestler : 'BULLY BOY' IAN MUIR, who is with us today, was doing 'bombs' off the small diving board with Dave. Touring with them was a 23 stone giant called BULL PRATT who was the worse for wear after a good many drinks.

'What are you doing ?' he asked. 'Dive bombs'  Dave replied. He then fed The Bull more drinks until he was completely off his face, asking if he could have a go at 'Dive bombs', then the pair sent him up to their room which was on the first floor, telling him that the balcony was where they were jumping from. Without hesitation, Pratt crashed down and the wash from his huge weight threw a young lad at the other end, right out of the pool, leaving the other two in hysterics!!

On another occasion he was training in Brixton with welter-weight : TONY TITCH WHITE , who remarked that he felt ravenously hungry. Dave said ' Leave it to me' and the boys then went into a cafe where Dave ordered teas and 2 rolls. Tony gulped his roll down in almost one mouthful, before choking and spluttering that his throat was on fire. Dave had deliberately forgotten to tell him that he had bought the strongest West Indian curry rolls. Tony spent the next three days on the toilet, much to Dave's delight.

Along with the humorous personality that delighted all of us, he was also an extremely gentle, kind person and a great humanitarian, which  was typical of this very special man. Some years ago, middleweight wrestler : JOHN HALL, here today  with his wrestling Son : JON RITCHIE, had been badly injured by some 'nasty' men as he called them, and while laying in his hospital bed ,was worried about not being able to support his Family. In a flash and without prompting, Dave said to him' I don't have much money John, but I will happily share what I have with you, until you are better. 'To this day, the Hall Family have never forgotten this gesture of kindness.

Throughout and long after his wrestling career, Dave together with his long term friend and fellow star : LEE BRONSON, loved helping children and budding athletes by teaching wrestling at the local clubs, and despite having a hip replacement he continued to pull around on the mats with Lee , right up until his unfortunate demise. This fact together with the time spent coaching rugby and physical fitness, gave hope and optimism for the sporting futures of countless young people who may well owe their own success to him.

I could speak all day about the exploits of this extraordinary human being, and the fact that so many of my friends have made the journey today, speaks volumes for the kind of man he was. There is NIGEL HANMORE, to whom Dave was best man at his wedding, who has  come by train from Bristol, LEE BRONSON, TONY TITCH WHITE, MAL SANDERS, MEL STUART, BILL BROMLEY (MASKED EMPORER), FRANK RIMER, SARAH BRIDGES, JOHN MCGUINESS, JIMMY ‘CROWBAR’ SULLIVAN, (GAY ONE)VINCE RANDELL, DEL WILLIAMS, JOHNNY KIDD, BASIL RILEY, ‘MAD DOG’ RICHMOND,  HURRICANE HAWARD, STEVE GREY, ‘JUDO’ PETE ROBERTS, TOM TYRONE, JIM FITZMAURICE, STEVE BARKER,’BULLY BOY’ IAN MUIR, JOHN HALL,JON RITCHIE,TONY SCARLO, JOHNNY KINCAID, Reunion Secretary : JO HUCKLE and partner NEIL . I have been asked to add the names of other wrestlers who could not be with us : JON CORTEZ, JOE D'ORAZIO,MICK MCMANUS, LLOYD RYAN, BANGER WALSH, AL MIQUET, STEVE VEIDOR, DANNY BOY COLLINS, MARTY JONES, COLIN JOYNSON, BILLY LA RUE AND DIANE FRETWELL who is the widow of TED FRETWELL, which must demonstrate to the world that this was no ordinary man, but an outstanding athlete with a huge humour, big fun loving  personality and a genuine love of life and people, whether it be as FRANK WALLEN or DAVE BOND .

We should not dwell on the sadness that is natural with death, but rejoice in the knowledge that this man brought something very special to everyone's life that he touched. He had a rare gift  that will be remembered forever . The gift of giving himself fully to everything and everyone, which makes it a privilege and honour to have called him friend. He has now gone to the great dressing room in the sky, to join those other great athletes that have passed before him, and where his Legend will live on forever . 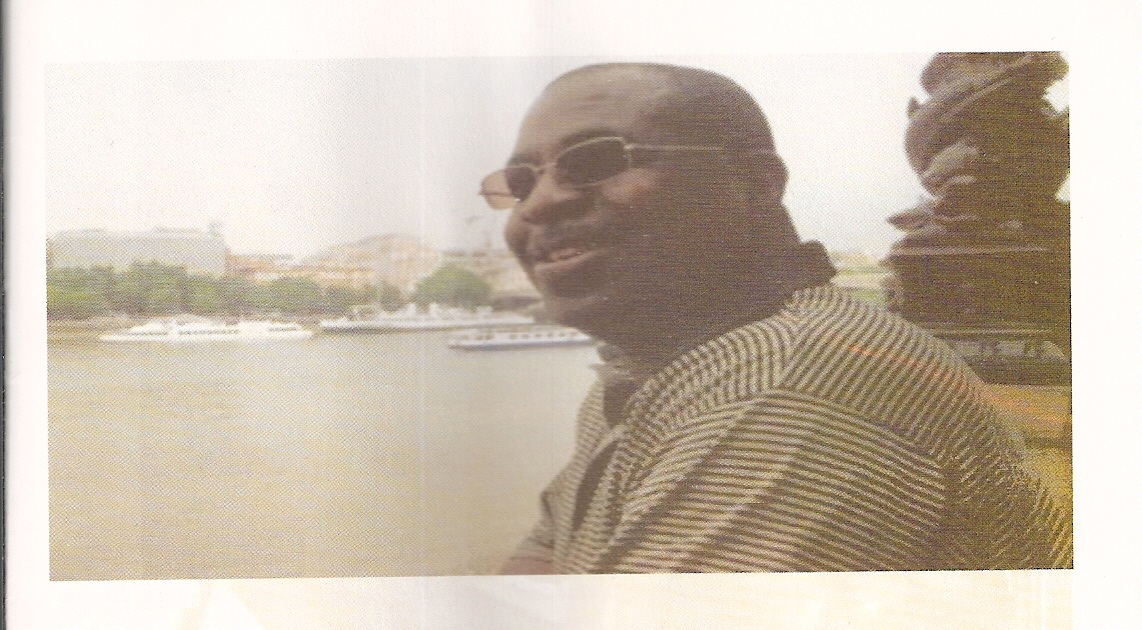