Adrian Street is without doubt one of the all time greats in the wrestling business not only in the UK but around the World.  The Exotic One has been in the business for over 50 years and his successes in the ring speaks for itself. As we have mentioned on our pages before Adrian keeps in regular contact with us here at the Reunion and always sends his best wishes to all of his colleagues as well as his fans around the world.  Adrian has always been a great favourite with the media and continues to be despite having his last bout in June of this year.  The BBC recently did an article on Adrian and for anyone who did not see this it read as follows:- 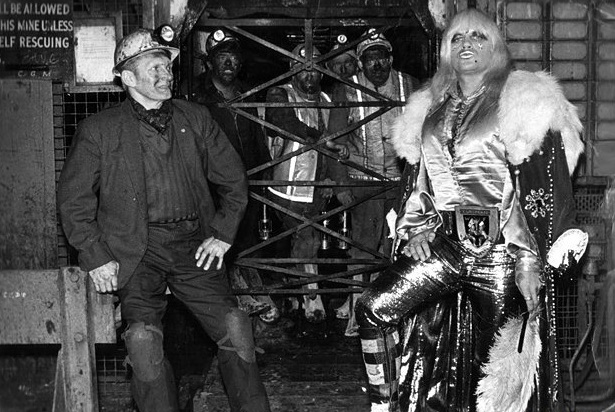 He was Kid Tarzan, The Nature Boy, and The Exotic One - a man who flirted with a flamboyant and sexually ambiguous persona for the public.

And for more than 50 years, Adrian Street goaded grapple fans as he wrestled his way from Wales to the USA.

Not bad for a boy from Brynmawr who ran away from valley's life down the pit - only to return to pose with his father in an iconic picture.

"They say one picture is worth a thousand words, that picture was worth a million words, because it hasn't shut its gob - just like myself - ever since it was taken," reflects the wrestling legend.

Now 73 - he has finally given up the professional game - but only just, competing in his last bout in Alabama last year.

"I've had fifteen thousand professional wrestling matches - most of which I've won," he said. Fighting, it seems was in his south Wales blood.

"My Great Grandfather, Big Jim Arnold, was a mountain fighter. They used to go out into the mountains where they would fight with bare knuckles. He once had a fight that lasted one and a half days."

Born in 1940 in Brynmawr to a mining family, at 15 he was taken out of school to work in Beynon's Colliery in Blaina.

"I hated that, I wanted to be a professional wrestler, so when I was 16 I ran away from home," he said.

The other miners ridiculed his ambition and told him: "Little guys like you can't be a pro wrestler - they'll rip you in half."

Leaving the mine for the last time, he made it clear he was not coming back: "My father was standing there, the other miners asking if he thought I'd make it in London."

His father joked that not only was he too small to make it in the profession "he likes his mother's cooking too much - he'll be back". 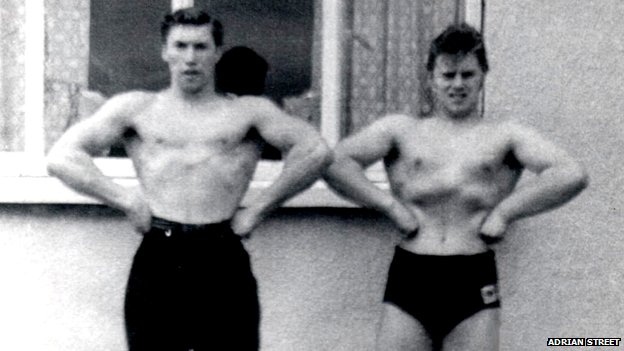 (Adrians older brother (left) had a left fist that was legendary, he'd knock your head right off)

"The thing is, they didn't realise how much good that did me, I would've starved to death, I would've died in London, rather than come back and give them the satisfaction," acknowledged Street.

In London, he started out boxing at a fairground booth, having up to seven fights a day.

He had his first professional wrestling match on 8 August 1957.

But to distinguish himself from the other wrestlers he felt were 'drab', he decided to become more flamboyant.

The reaction he got from the crowds was not what he was expecting.

"I thought they'd say, 'What a terrific looking athlete Street is', instead it was like 'Ooh Mary, ooh isn't she cute'," explained the fighter.

"I was used to ridicule - from the coal miners to the other wrestlers - so there was no way I was going to let everyone see how disappointed I was, so I stepped it up and started blowing kisses to people, skipping and hopping round the ring."

Winning the European Middleweight title in 1973 caught the attention of the national press who sent a photographer to cover his story. There was only one place Adrian wanted his picture taken - back at the coal mine where they had laughed at his ambition. 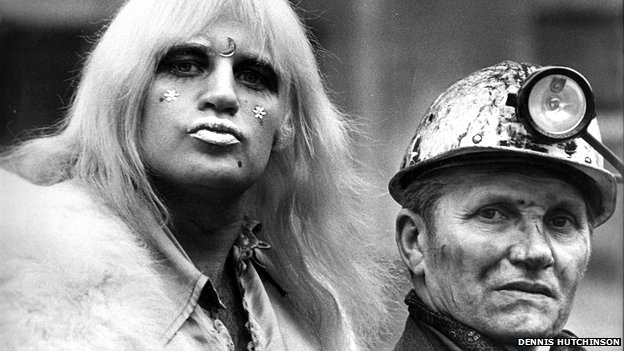 (Adrian with his father Emrys at Beynon's colliery pit head)

The subsequent result is described as "shocking" by the Turner prize-winning artist Jeremy Deller.

"That photograph is a revenge photograph, it's him going back to the pit, where he'd worked and been bullied, teased and laughed at, to show his father and the guys in the pit what he'd made of himself and how proud he was of how he looked.

"His journey is symbolic of the one Britain took at the time. To go from a country that relied on industry, to one that has since relied on entertainment and services. And he was a trailblazer for that route."

His journey, as Deller put it, was only just beginning. He moved to the United States in 1982, just as the British wrestling fans began to fall out of love with the likes of Big Daddy and Giant Haystacks. 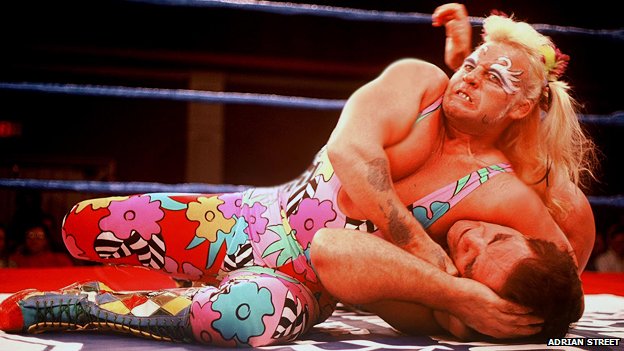 "I've always been regarded as a violent guy, even by the standards of the profession I was in"

And while his star kept on rising in the US - that pithead picture kept his feet on the ground, when he wasn't being thrown around a ring.

"That photo is my way of making a two-finger salute to the lot of them," added Street.

"I think by now I've proved my Dad and the other coal miners wrong." 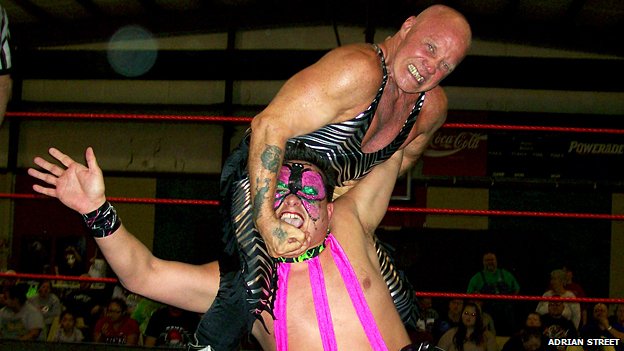 In his last ever fight he faced 'The Exotic Ones', named after Adrian's old persona - he won, naturally.

We thank Steven Green from the BBC for the use of this article and of course Adrian Street for the use of the photographs from his personal collection which can now been seen by all of our members.

As some of you will already know Adrian is in the process of finalising his 6th book which will surely be as successful as the previous 5 which have been best sellers around the world.  The book is due to be released shortly and once we have a publication date we will report it here and of course the book will be available from our webstore as well as the usual other retail outlets.