It was inevitable that Tony St Clair would follow his father Francis St Clair Gregory and older brother Roy St Clair into the ranks of professional wrestling but originally this may not have been the case as Tony had a bright future as a goalkeeper playing in the youth side for Manchester United. However, footballs loss was to be wrestlings gain as Tony turned professional in 1967 having his first match against Johnny Eagles.

(A young Tony St Clair starting out in the business)

Tony was finding is feet in the professional ring and what better way than to join forces with his brother Roy forming the Saints tag team.  The team were fan favourites up and down the country for Joint Promotions and what with Tonys youth and eagerness to learn and Roys experience the team were successful wherever they appeared.   Such were the charisma that this team had that in their first year they wrestled the Black Diamonds on the FA Cup Final Day spectacular from Rotherham.   The Sainst were much in demand and wrestled all of the top tag teams of the era and even tangled with Jean Ferre who later went on to become Andre the Giant.   Whilst Tony and Roy both continued with their solo careers the Saints tag team continued to grace the UK rings for six years before finally ending with Roys retirement. 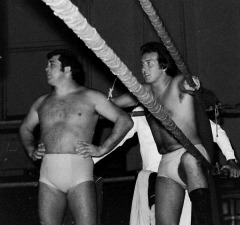 Tony now found himself without his brother but this didnt deter him and as he progressed through the weights the success continued.  In 1977 Tony received a title shot against then British Heavyweight Champion Gwyn Davies.  This was a hard fought match but one that Tony relished after ten years in the professional ranks and the hard work paid off as Tony was victorious and left the ring as British Heavyweight Champion for what was to be the first of his four reigns. Tony also continued in periodic tag team action teaming with Big Daddy in many contests.

In 1978, after holding the British Heavyweight title for nearly a year Tony had one of his toughest defences when he faced the mammoth Giant Haystacks.  Whilst Tony had the upper hand for a lot of this match he eventually lost the match in a controversial manner but was granted a rematch with Haystacks which Tony won by disqualification and was again named British Heavyweight Champion for a second time. 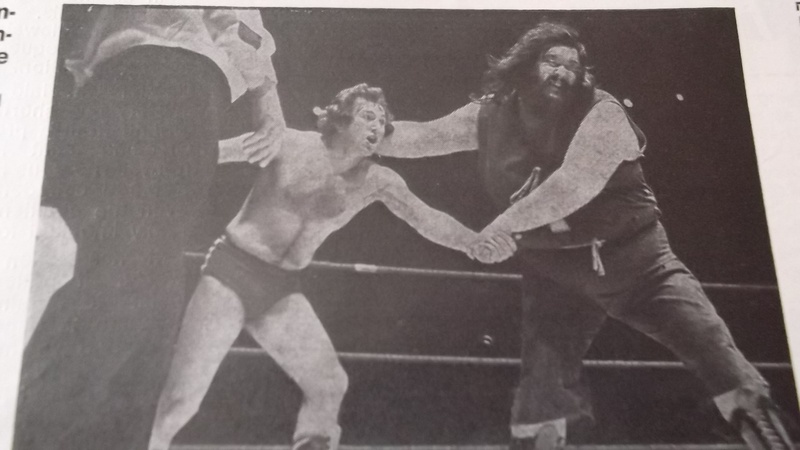 (Tony in action against Giant Haystacks)

Tony successfully defended the British Heavyweight title on many occasions against the top British heavyweights of the day and in 1982 he left Joint Promotions whilst still Champion and went to All Star Promotions where he continued to defend the title on a regular basis until losing it to Kendo Nagasaki in 1988 after nearly 10 years as Champion.  However, by the end of 1988 Tony had regained the title but lost it again to Dave 'Fit' Finlay in 1990.  Tony, never one to give up, regained the title in 1993 from Dave Taylor and then held the title until 1995.

Tonys biggest achievement came when, in 1982, he faced the biggest match of his career when he faced then World Heavyweight Champion John Quinn for the World title and belt.  Tony and John had what has been described as one of the best heavyweight matches for many years and at the end of the match Tony left victorious.  Tony held the World title belt for nearly two years before losing it back to Quinn in February 1984.  However, in March 1984 Tony won the belt back from Quinn only to lose it again in April 1984.  However,  as a two time World Champion Tony will always be remembered as one of the greatest heavyweights of that period. 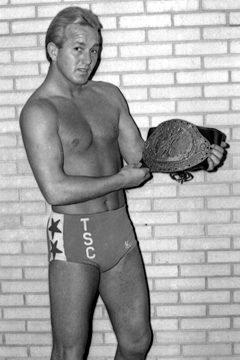 Although Tony was always in demand in the UK he also had a great love for Europe and had infact first wrestled in Germany in 1974. In 1984 whilst at his peak Tony made his debut for the CWA where he toured Germany and Austria.  In December 1984 Tony won the CWA Championship but vacated it one year later.  In 1988 Tony and Miles Zrno defeated Rollerball Rocco and Dave Finlay to capture the CWA tag team titles which they held for over a year before losing them to Marty Jones and Fit Finlay.  Tony continued to wrestled on a regular basis for CWA facing many of the top names from the European wrestling scene. 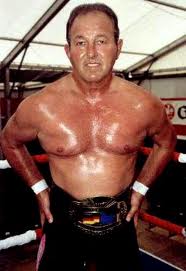 As well as his continued success in Europe Tony also had a stint in Japan, a mecca for professional wrestling, and whilst Tony was not successful in winning any titles whilst in this country he certainly cemented his name as one of the top heavyweight wrestlers in the world.

In 2006 after nearly 40 years as a professional wrestler Tony had the biggest fight of his life when he suffered a stroke.  Whilst Tony has made a full recovery from this illness his wrestling days were now at an end and his retirement was announced.  Tony is currently living in Germany with his wife Christiane.

(Tony St Clair at the British Wrestlers Reunion in 2013)

Tony St Clair will always be remembered as coming from one of the greatest wrestling families the UK has ever produced as well as achieving the ultimate goal by winning the World Championship on two occasions as well as many other titles.   Tony is a great supporter of the British Wrestlers Reunion and attends the Reunion most years where he is always happy to talk to fans and catch up with his fellow professionals from years gone by.  We feel that after all his honours in the wrestling business Tony more than deserves his entry into the Hall of Fame.