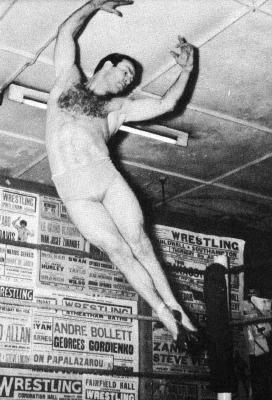 Bernard Herman was born in St Louis, Missouri in 1931 little knowing that years later he would become a world renowned star as the professional wrestler Ricki Starr.

Initially Bernard or Ricki entered the ring not as a professional wrestler but as an amateur boxer and won numerous titles around America and was tipped to enter the professional ranks. However, Ricki had other ideas and went down a road that nobody had even dreamed of as he went from boxer to ballet dancer. 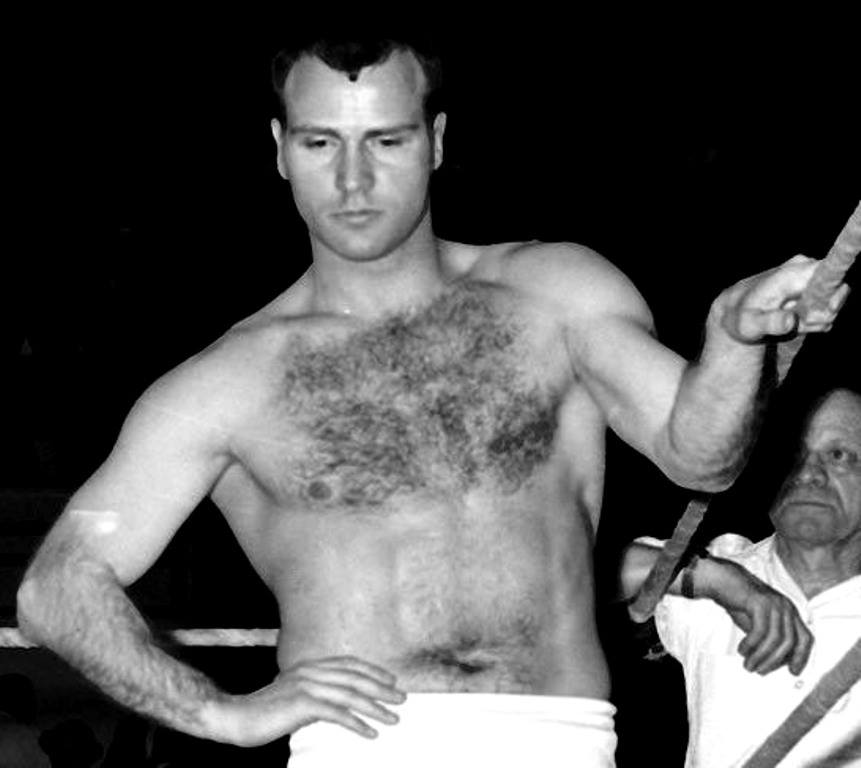 (Ricki Starr ready for another bout)

Ricki originally toured America learning his ballet craft and appeared in many stage shows before securing a job with the Ballett Russe de Monte Carlo where he embarked on a very successful tour of Europe.  As a result of this Ricki came to the notice of talent spotters in the entertainment industry and on returning to America he appeared on Broadway in Annie Get Your Gun and Paint Your Wagon.

Despite having a good life in ballet and in stage shows Ricki was being drawn back to the ring and when he decided to return it it was not as he had previously done in the boxing ring but in the wrestling ring (Rickis father had actually been a wrestling referee).  Initially continuing with his ballet routine as a way to earn an income Ricki turned professional wrestler in 1953 and worked for many independent promoters in America before joining the National Wrestling Alliance which at the time was a dominant force in professional wrestling.  Ricki was soon given the opportunity at a championship belt albeit a tag team title and won this with his then partner Ray Gunkel.  Although Ricki was to lose this title shortly afterwards he did win the tag team championships twice more in his career partnering Cyclone Negro on one occasion and our very own 'Judo' Alfred Hayes on the second occasion. 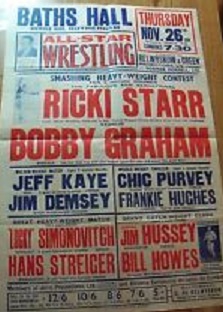 Ricki Starr was now becoming a well know name around America although he realised that if he wanted to be a name that everyone would remember then he had to have his own 'gimmick'  Ricki soon realised that what was to later become his trademark in the ring was something that he already knew, something that he excelled in and something that was new, a wrestling ballet dancer and so Ricki implemented this into his bouts and it was an instant success with the fans loving the 'new' Ricki Starr. This would catapult Ricki to national stardom and he was soon in the main event selling out Madison Square Garden on a number of occasions.

Ricki was now a huge star in America and he was soon being noticed by promoters around the World.  Initially approached by Paul Lincoln in 1963 to join his stable of wrestlers Ricki arrived in England and was due to headline bouts around the country.  However, shortly after his arrival Ricki was approached by Joint Promotions with the promise of television exposure and was soon wrestling for them.

Despite the promise of national television exposure Ricki Starr only appeared a handful of times on ITV, Rickis entrance to the ring complete with ballet shoes and tight wrestling trunks combined with his pirouetting around the ring left the audience wanting more, this was something that had not been seen in a ring and what with Rickis 'feminine' attitude towards his fellow wrestlers was somewhat amusing and entertaining despite some of the comments made to him by members of the crowd. 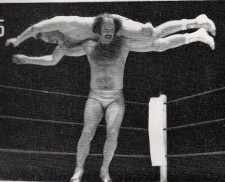 Ricki was soon a big a star in the UK as he was in his native America and he was soon opposing such wrestlers as Mick McManus, Steve Logan, Mal Kirk, Danny Lynch, Johnny Czeslaw, Steve Haggerty and Les Kellett to name but a few.  Ricki although playing the part of a ballet dancer was infact an accomplished wrestler and defeats were rare, winning a number of his bouts with his aeroplane spin manoeuvre.

Whilst Ricki was now a regular competitor in the UK he was also in demand around the world, as well as wrestling in the USA he also competed in the German tournaments as well as grappling in France, Egypt, Tunisia, Turkey and Greece and was earning a good living from the wrestling business. 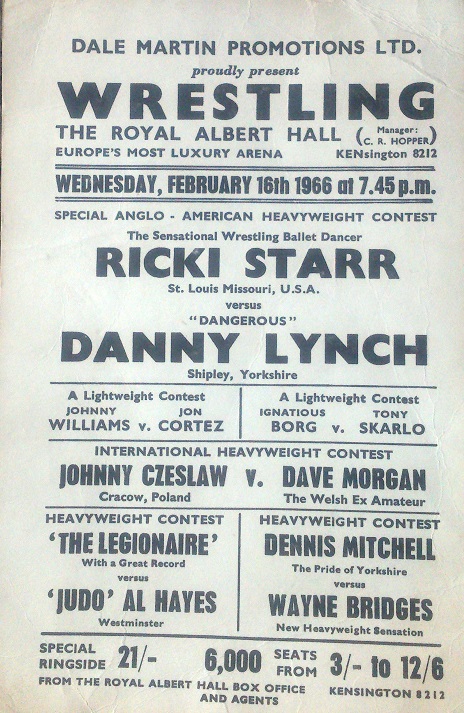 (Ricki Starr in the main event at the Royal Albert Hall)

In an attempt to lure Ricki back to the UK, promoters promised him main events status at their prestigious Royal Albert Hall shows where he wrestled the likes of Mick McManus, Jackie Pallo and Danny Lynch winning all three bouts (albeit by disqualification against McManus).  However, despite these huge bouts Ricki was still in high demand and his time in the UK was limited as he continued to tour around Europe and the rest of the world.

During the mid 1970s, Ricki returned to the UK with a slightly different look from how fans had remembered him but on this occasion he wrestled for independent promoters although he did continue with his mini feud with Jackie Pallo, bouts that were a hit around the country.  It is beleived that Ricki had over 1000 bouts in America and over 100 bouts in the UK and Europe.

On retiring from the ring many expected Ricki to return to his home country of America to live out his retirement but infact he chose to settle in the UK and set up home in London where he continued to live until his sad death in September 2014. 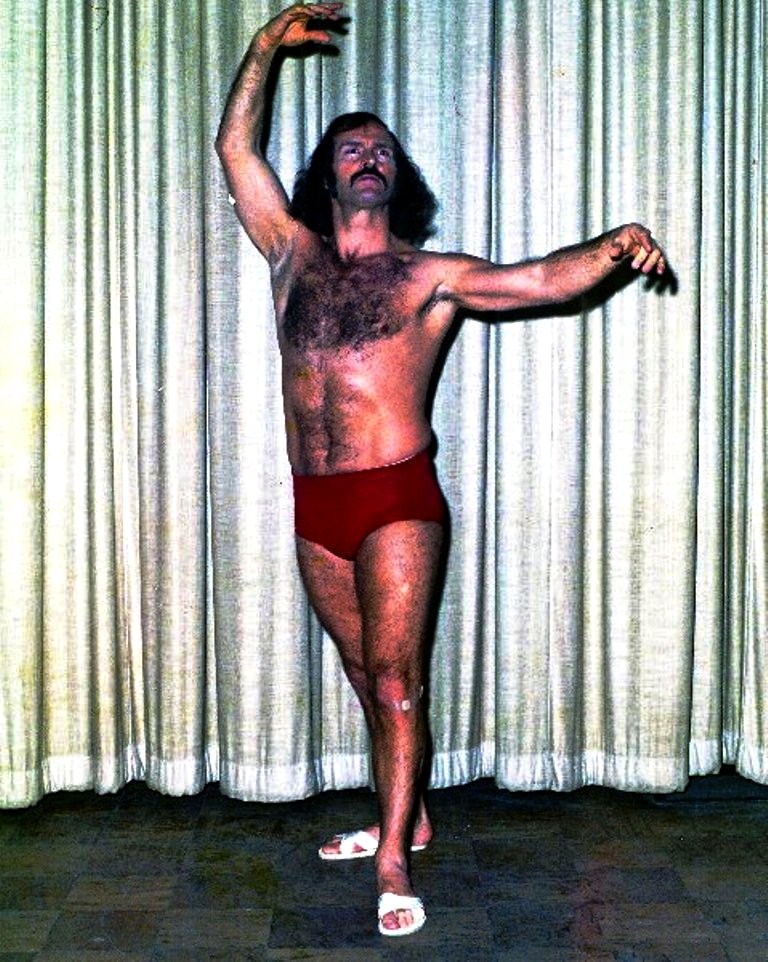 (Ricki Starr poses for the camera)

Despite the fact that Ricki was a huge wrestling star around the World, upon his retirement he chose not to continue with any involvement in it.   However, in 2013 he did send a message to us at the Reunion which was read out on our Reunion day, the message was as follows:-

'Best regards to 'old colleagues' at the Wrestlers' Reunion. I'm 82 and am lucky enough to have all my faculties, which I put down to the wrestling warm-up routines that we all used to practice. I have tried to keep this going through the years although the aeroplane spin is too much now. I remember many great matches – Jackie Pallo at the Royal Albert Hall, Les Kellett, Mick McManus and many more UK wrestlers and personalities from the sixties and seventies. The UK was and still is the best place to be.'

Sadly, Ricki Starr passed away on the 20th September 2014 and the following statement has been received by the Reunion from his son Simon and it reads as follows:-

'Very sadly my father passed away on 20 September at 83. He went peacefully thankfully and didn't suffer for too long. He had an amazing life and respected that. At some point I would like to write something about him and his life out of respect to his followers.'