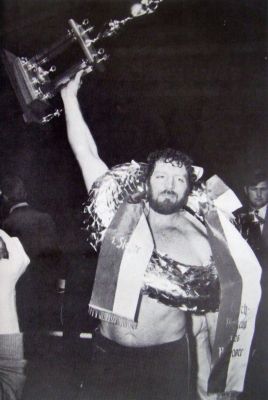 Pat Roach was born in Birmingham in 1937 and by the age of 16 had gained a black belt in Judo. He then turned to boxing and was one of only a handful of fighters to win the Jack Solomon trophy, touring the U.K. rings as part of that entourage. From this impressive achievement the 6'5,and  20 stone giant went into the rings of Great Britain as a wrestler, becoming an instant hit due to his size and skill.  Even though Pat was one of the largest athletes in the ring he was able to match holds with some of the smaller and more technical men of the era, this speed and agility, combined with his immense size made him a devastating opponent for anyone.

In 1971 at the height of his wrestling fame Pat Roach made the transition into the movies starring in Stanley Kubricks A Clockwork Orange appearing in the movie as a bouncer.  He would work with Kubrick again in 1976's Barry Lyndon.  In 1977 Pat auditioned for the part of Darth Vader in Star Wars, narrowly missing out to that other legend David Prowse, although in later years would appear in that role during one of the sequels. This early audition had impressed George Lucas so much that when he was working on theIndiana Jones Trilogy, he offered Pat several roles in the films, where he taught and befriended star actor : Harrison Ford who remained friends until Pat's death, sending condolence message for the funeral. In 1988 he was offered a part in another Lucas production Willow.

Other screen credits for the big man include Never Say Never Again opposite Sean Connery, Conan the Destroyer and Red Sonja opposite Arnold Schwarzenegger who also became a close friend and wrote the foreword to Pats biography, plus  Robin Hood Prince of Thieves with Kevin Costner.  He also found time to play the role of "Bomber" on the hit BBC show Auf Wiedersehen Pet, a role that was to last 20 years until his demise. During the last series filmed in the States, the cast knew that Pat was seriously ill but were unaware of his cancer being terminal as he being a true Professional insisted on doing the job properly.

Throughout all of these accomplishments Pat still worked in the rings of Britain when his schedule allowed and ran a fitness gym in Birmingham.  Serving on the British Reunion Committee in between times.

He was diagnosed with cancer of the brain and face in 1998, but told no -one, not even his beloved Mother. He had several operations and chemo therapy to battle the disease which he held at bay for six long years. Finally, he succumbed to the blight and was taken into a hospice run by McMillan nurses, where he died within two weeks. Pat's loss from cancer in July 2004 hit all within the Wrestling world really hard, and especially his many acting friends.

The whole cast of 'Pet' were at the funeral where Pat was buried under a tree at the top of a hill with his devoted Mother in attendance. The actors Kevin Whateley, read his favourite poem 'If', Tim Healey and Timothy Spall read eulogies and Jimmy Nail sang 'Danny Boy' at the graveside but changed the words to 'Paddy Boy' which was his Mothers per name for this truly great Legend. He was just 67 years old .

He is deeply missed by all.