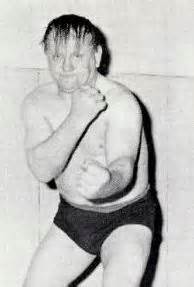 Yorkshireman Les Kellet was born in  in 1915. After completing an engineering apprenticeship and travelling the world as a merchant seaman Les returned to Bradford following the Second World war and established himself as one of the most successful and popular British wrestlers of all time. His wrestling trainer, Len Pickard, and promoter George de Relwyskow Snr., are the two men credited with cajoling the reluctant Kellet to follow a Professional career

Having turned Professional in 1938, the outbreak of war soon curtailed Les's wrestling career. Returning to after the war, and  living in , it was a chance encounter with wrestler Joe Hill which resulted in Les moving back to  and devoting his energies to a full time Professional wrestling career. By 1946 he was travelling the country and attracting new fans wherever he wrestled.

Every fan of the Mount-evans era has a favourite memory of Les, whether it be his spectacular spin  through the ropes (falling backwards through the ropes and then propelling himself back into the ring), which he did despite a recurring serious back complaint,or making his opponent look foolish by feigning semi-consciousness and then sidestepping a blow at the last minute. It was this ability to humiliate his opponent that gave Kellet his unique flair for pleasing the fans.

His comedy side to the job, came about when he was being televised but forgot his dentures giving rise to some close up shots of him gurning, which is a Yorkshire speciality. Having received thousands of letters , he kept the faces in his reportoire.

Les Kellet was British cruiserweight champion in the early 1950s, until the newly created Joint Promotions re-organised the weight divisions and ended his reign. Frankly, Les's huge charisma and popular appeal meant that the loss of the title was of no great consequence.

Outside of the ring Les Kellet was a pig farmer and  had the reputation of being a very hard man with a high pain threshold. Stories abound of his no-nonsense approach to life, which he publicly admitted led to him being disliked by some in the profession. Personal contentment came from running a small holding and café with his wife, Margaret. There was tragedy for Margaret and Les in 2000, with the untimely death of one of their two sons, David, who wrestled as Dave Barrie.

Although Les's career continued until he was well into his late sixties he remained a crowd pleaser until the very end. A distinguished occupant of the Hall of Fame, Les Kellet died on . aged 87.