Joe D?Orazio was born on the 27th July 1922 in Bermondsey, South London, of Italian parents.

He was brought up in a very tough working environment. In fact, two of his classmates were later hanged for murder, and five others became professional wrestlers. Joe was educated at English Martyrs Roman Catholic School in Walworth, attending school with Harry Geoghegan who went on to become a fine wrestling referee. At 13 years of age, Joe was elected by his classmates as the youngest ever Captain of the school. Joe?s best friend until his untimely death in 2003 was the South London iron man and for many years Mick McManus?s tag partner : Steve Logan.

Joe?s Grandfather owned what was considered to be the best fish and chip shop in South London and this is where Joe worked until the outbreak of the Second World War. During the Luftwaffe?s horrific blitz on London, before enlisting in the Royal Air Force, Joe worked as a member of a demolition squad, knocking down bombed buildings in the City of London.

The war meant the parting of the ways for best pals Joe and Steve Logan. Joe was to spend 4 years in the Royal Air Force air/sea rescue unit, while Steve was away with Montgomery?s 8th army, serving as a desert rat in El Alamein, but they managed to keep in contact by mail, throughout the war, and afterwards renewed their old friendship.

On leaving the armed forces, Joe took up Judo and Steve took to boxing as well as Judo.

Joe joined the South London Judo Society, under the instruction of

George Chew, and in just over a year , went from novice to Black Belt 1st Dan. Joe and Steve were key members of the 4 man Judo team that took the interclub Judo team title in 1948 at the Chelsea Town hall.

His first professional match was against the New Zealander Russ Bishop in Poole Dorset. Joe?s abilities were quickly recognised, and he was soon in great demand by all the top Promoters to wrestle on their shows.  By 1950, Joe was made a honorary member of  Gruppo Autonomo Lotta Giapponese, and travelled to Rome for the presentation of his membership enrolment. For the next 20 incredible years, he wrestled all over Britain and Europe. His tag partner during this hey day of grappling, was the inimitable entrepreneur : Paul Lincoln,who was sometimes known as the fearsome Doctor Death, but doubled up with Joe as Togo Tani.  However, after several injuries, he decided to retire to ?avoid becoming an invalid for life?.

His last Professional bout was against the legendary George Kidd in 1968. 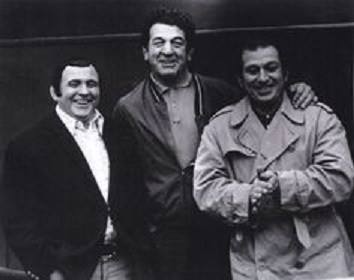 Unable to shake off his passion for wrestling which was in his blood, ( see ?a Wrestlers Lament?, his 159th poem,- below), he returned as a referee, only to break his nose twice in the first six months. However, he persevered, and as in his earlier wrestling career, refereeing took him  to many places including Blenheim Palace, Olympia, Café Royal, , Lyceum Ballroom, Paisley Ice Rink, Paris, Belgium, Berlin?s Big Top, Hanover Big Top, King Hussein Stadium in Jordan, Italy and many more.

For a further 20 years, he was resident referee at London?s prestigious Royal Albert Hall Tournaments,becoming a favourite of his Royal Highness the Duke of Edinburgh, with whom he became quite friendly.

Joe has made many friends in wrestling over the years. Despite their often fearsome uncompromising ring image and reputations, wrestlers have a common bond and their loyalty and enduring friendships are admirable.

Here are some photos from his extensive collection, working with the greats of wrestling. 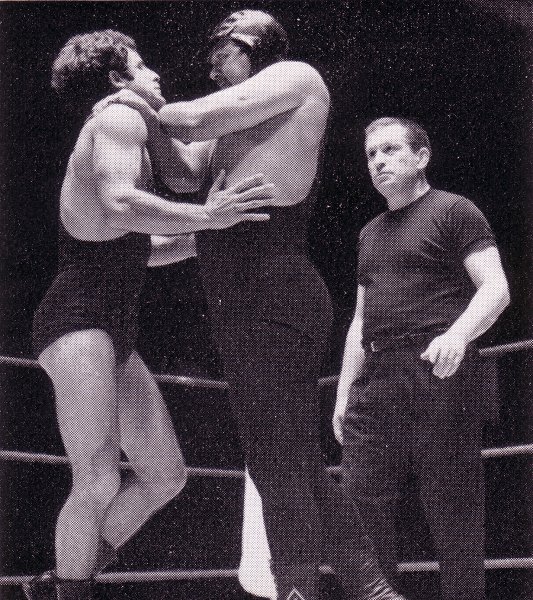 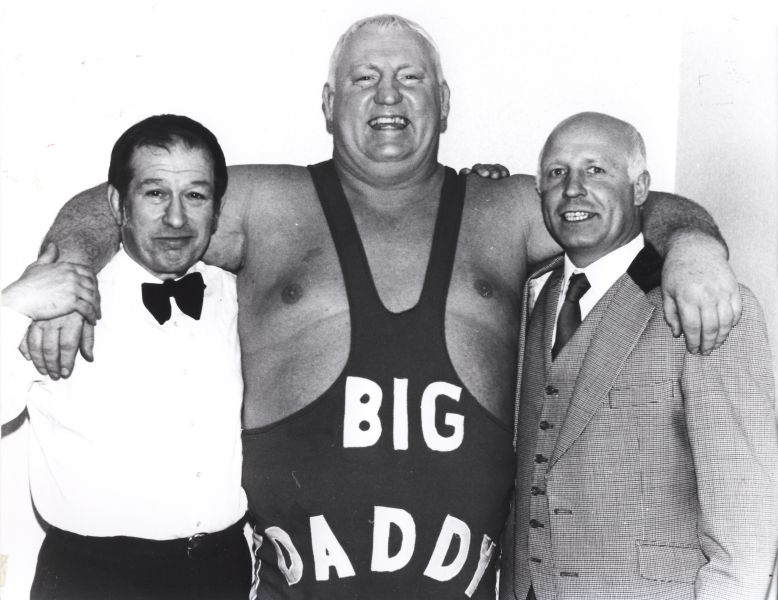 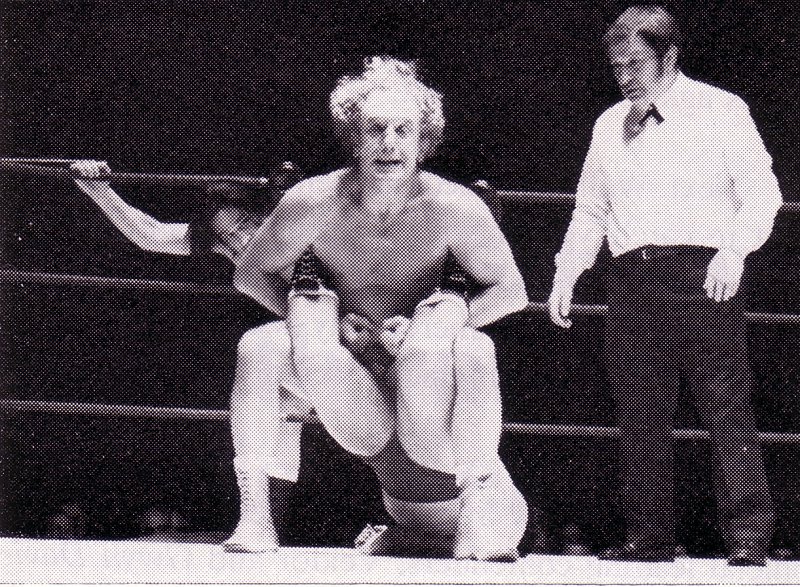 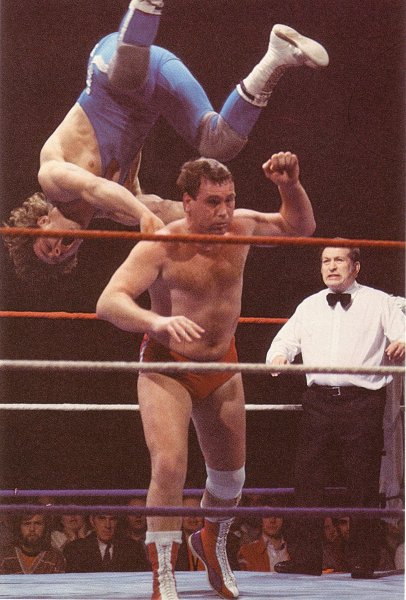 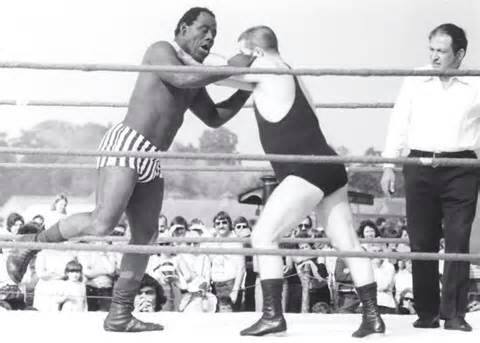 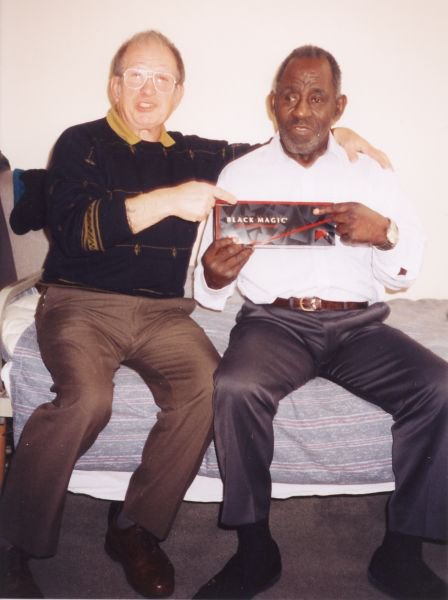 Away from the ring, Joe became a member of Mickey Woods ?Tough Guys Unlimited? stunt team.He did lots of film and television stunt work, a highlight coming when he doubled for Hollywood star :J.Carroll Naish whilst filming the TV series ?The New Adventures of Charlie Chan?. He also stunted and acted in ?Camp on Blood Island? and ?Terror of the Tongs? , and appeared in the film ?Geordie?. Joe worked in Rome on ?Quo Vadis? , 'A matter of Honour', and was a gunslinger in the Wyatt Earp Show, when it came to the U.K. from America, plus a starring part in 'Night and the City' with Richard Widmark.

Other television work included ?King and Castle?, ?Flight through the Branches?, ?Young Charlie Chaplin?, ?Blind Justice?, ?Radical Chambers?, ?Story Board?, ?Rumpole of the Bailey?, and more recently : Londons Burning?, ?The Bill?, Henry Kelly?s early morning breakfast show, He also starred in one episode of Humphrey Burton?s ?The Age of Aquarius ?The Wrestling Poet?.

On radio, Joe worked on the ?Late Night Show?, with Monty Modlyn, and was on the panel with Monty and Anne Shelton, which ended up with Joe singing a duet of ?My Old Man said follow the van ? with Miss Piggy. Up until then his role had been to answer listeners questions on wrestling !

In the early 1990s following the sad demise of the TV wrestling favourite and charity worker extraordinaire : Catweazle from cancer, Joe realised that there was a need for wrestlers to hold a regular get together and not just at funerals. Mal Mason subsequently held a gathering in his Kent garden, but only managed to attract 6 people, and then Joe decided to Found the British Wrestlers Reunion with the aid of Tony Scarlo . Their next attempt several weeks later, also in Mason?s home, rose to 13 visitors, with the result that  the event was moved to London , in the pub owned by the great dazzler himself:  Joe Cornelius. One year later, the Dazzler emigrated and Wayne Bridges assisted by his lovely partner : Sarah Bridges took over as hosts, a role that they have adopted since. Although Scarlo and Mason have since left the fold, relinquishing their responsibilities some years ago, the Reunion with Joe at the helm, has  grown out of all proportion and flourishes to this day, to have become the largest Annual gathering of its type in the world, only exceeded by the Cauliflower Alley Club in the United States. As a mark of recognition for all his efforts in achieving this remarkable feat, Joe was made Life President in 2003. 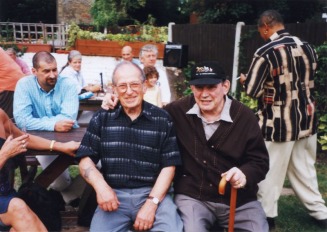 The Reunion and Steve Grey in particular, commissioned a sketch drawing by a celebrated artist depicting some of the great mans achievements in gratitude for everything that he has done for the community.

A rather lesser known facet of the great mans unending list of talents, is that Joe D?Orazio is an accomplished artist/painter, selling a lot of his art work in exhibitions, with the  rewarding result of him being recruited many years ago by the Teachers of Crispin House, an Adult Training Centre for the mentally handicapped in Bermondsey, and where he worked full-time for over a decade.He surprised everyone, not only by teaching severely handicapped people to paint, but also exhibiting their work and selling a number of paintings. Joe?s students have exhibited at South London Gallery in the Park, Southwark, The Stock Exchange, St Johns, Piccadilly, Royal College of Art, The New Cross Art House, and Southwark Cathedral. Joe is constantly asked by Handicapped schools all over London to give art seminars .He was originally introduced to this rewarding work by the great Steve Grey , who has also shared a lifetime career in the care Business. 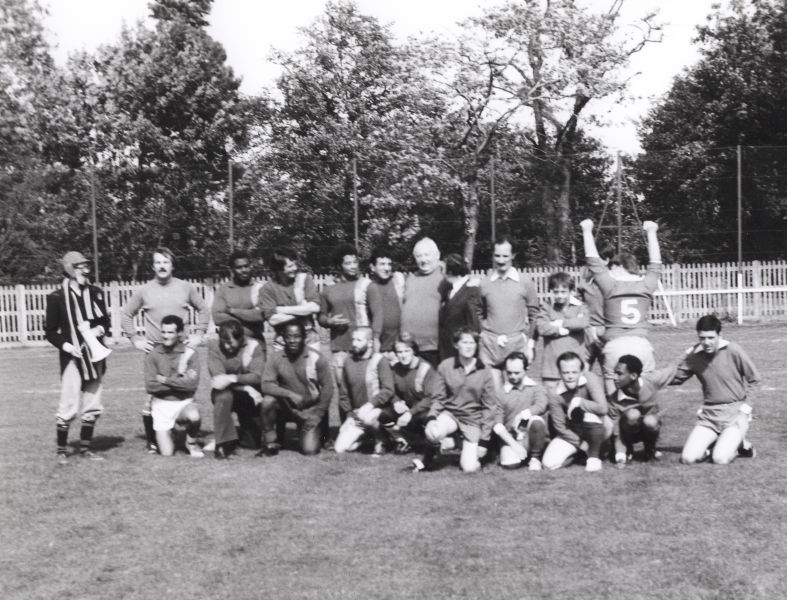 As a writer, Joe is a successful writer of prose, and in 1971 wrote ?The Who?s Who of Wrestling? with Co-Author : Pam Edwards.   A book which has become an all-time favourite reference manual on grappling.  The book was written in parallel with his refereeing career, he worked for Dale- Martin Promotions Ltd?s publicity Department ( at that time, the world?s largest Promoter of Professional Wrestling) . His work included the preparation of write-ups and programme material for all their shows, which in those days could often run to as many as 10 per day! Joe also turned out a weekly column in ?Business? and for many local papers throughout Great Britain. 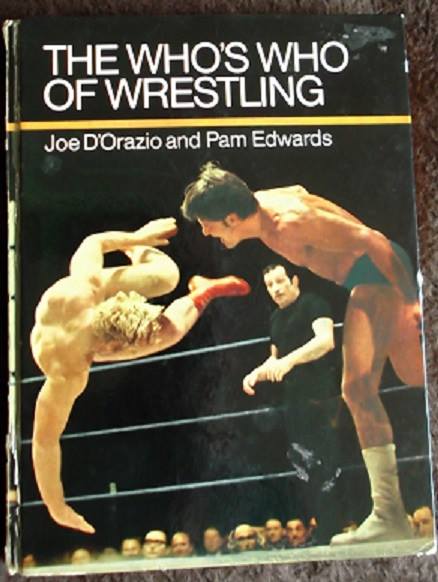 (The Who's Who of Wrestling written by Joe)

As a celebrated poet, he has had many books of poetry published, and continues to write. To date, he has written over 300 poems. Like ?Ode to Mad Hannah?, his long masterpiece. Many are deep ,dark, meaty and haunting . Some of his lyrics inspired by his lovely Italian born wife: Tina, are soft and touching. He says ?I never thought about poetry until I met her?. His work is varied, sonnets  ranging from love through odes to tramps and meths drinkers, ?Old Beppo the Potter?,?an Italian Resistance Worker?, ?Mick McManus?, ?The Income Tax Man?, and ?Tell them I sleep?.

Shakespeare was his favourite writer, and he writes only to satisfy himself , quoting ?Once I have the first line, the rest is easy?. Ideas come at any time- even when he is buffeted between ring baddies. His pockets bulge with instant first lines scrawled on odd scraps of paper.Joe firmly believes ?The world would be a better place if we all spoke poetry to each other?

These days this God of the Mat world, this awe inspiring  wrestling/ Judo playing athlete turned referee, poet, writer, artist, painter, film actor, TV actor, Reunion President,  still goes to work 2 days a week,teaching the disabled, and is writing his autobiography along with new book of poetry from the boys aptly entitled

?Ring a Ring of Roses, Cauliflower ears and broken Noses?

Joe D?Orazio is a true legend and inspiration to us all, and we should feel deeply honoured, if we have been privileged to cross paths with this wonderful modest man  as he passes through our lives  !!!

Excerpts of poetry by Joe D'Orazio :-

I?m just about fed up with this game

With its bumps, its bruises and bangs,

And the dear sweet old ladies at ringside

Sharpening their claws and their fangs

The soft fat man with his blonde girlfriend

Who jabs with lighted cigar butt

Is ?Why don?t you get your hair cut??

Ready to maim and kill

Umbrellas at the ready

Would have burned at the stake

Who greet every fall with ?Fake?

Smelling of smoke and rain

I wish they would jump in the river

Then I could pull the chain

The din: the clamour. The peanut shells

The microphone booming above it

I would leave it tomorrow, I would, I would

But the trouble is I love it.

EPITAPH FOR A GLOBE TROTTING WRESTLER- ( Who died unwed)

For thy last bout is won

And this thy last reward sleeping in the sun

Wait not upon the morrow

For thee, all time does combine

To keep without all sorrow

Rest now this fevered brain which on this Earth

So filled itself with larger dreams of life

And at the end betrayed thee, and led thee here to die

Unmourned by any wife

TELL THEM I SLEEP

Tell them I sleep

In a marble bed

Neath a blanket of green

I dream my dream

The present, the future, and what has been

And should they ask as to my life

Say I left behind a wife

Who to herself and me was true

And never gave me cause to rue

But with soft and warm caress

Filled all my nights with tenderness