Eddie Capelli was born in 1927 and from a very early age caught the wrestling bug regularly attending local shows at the Blackfriars Ring.

As the Second World War approached Eddie started what was to become a near thirty year association with wrestling when he joined the John Ruskin Club, a local amateur wrestling club in South London and where he worked hard to learn his trade which was to become his living. 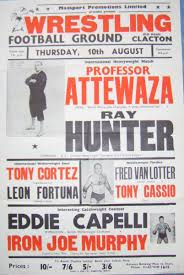 Eddie Capelli had his first professional bout in 1948 and in 1949 a young Eddie Capelli was given the bout of a lifetime as far as he was concerned when he was chosen to face the then British Welterweight Champion Harold Angus.  Many fans thought that the far more experienced Angus would overcome the young Capelli in record time but not to be deterred Capelli produced one of the biggest upsets in wrestling history when he defeated the champ to win the title and belt.  Capelli defended the title on numerous occasions over the coming years finally succumbing to Mick McManus in 1952.  Despite further attempts to regain the title Capell was never to reach the heights of being a singles champion again.

After losing the belt to McManus Eddie remained a mainstay of the wrestling business and appeared a number of times on World of Sport.  Whilst a very popular wrestler Eddie was often pitted against the top stars of the day and always gave a good performance, however the triumphs of his earlier career were never repeated.

During the 1970s Eddie formed a very successful tag team partnership with Ken Joyce.  The pair wrestled throughout the UK and Europe and had the honour to hold the European Tag Team Titles which they successfully defended on a number of occasions.

Eddie Capelli retired from the ring in 1976 after nearly 30 years and his achievements and the entertainment he gave to his army of fans makes him a worthy addition to the Hall of Fame.

Kendo at the Reunion
3341 views