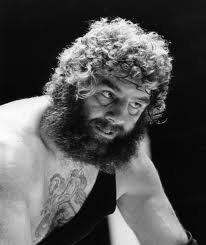 Frank  'Bruno'  Elrington was a Professional wrestler who was a large part of the Southern Wrestling scene in the UK.

A Yorkshire man by birth Bruno was always billed from Portsmouth where he ran a gymnasium and trained with fellow wrestlers like Johnny and Peter Wilson, Bronco Wells and John Kowalski. Bruno was soon to become one of the most recognisable men in british wrestling.

Bruno Elrington served with the Royal Marines and was a boxing champion within the forces. At a height of 6 foot plus and weighing around 20 stones he was an intimidating and imposing figure in the ring but his size and weight disguised a swift and agile performer.  Just the name Bruno was enough for the fans, no surname was required as everyone knew the wrestler and knew they were in for a great night of wrestling whenever he appeared.  Having started his career with the Paul Lincoln stable Bruno ended his career under the Joint Promotions banner. 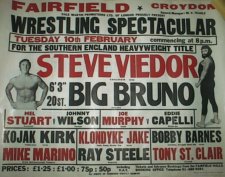 Although Bruno was often booed on his way to the ring by the fans there were few  who were critical of his in ring abilities and Elrington could and often did out wrestle whoever he faced but despite his considerable technical skill he did have a tendency to resort to breaking the rules when things went against him and this divided the fans between those who admired his technical skill and those who jeered him for his cheating ways.

(Another victory looms or Bruno Elrington)

Bruno was liked and admired by the majority in the business and you rarely heard a bad word said against him and whether he was playing the baddie or not he always had time for the fans and they in turn always recognized him as a warm hearted and generous man and retained an affection for him even when he was at his most villainous. 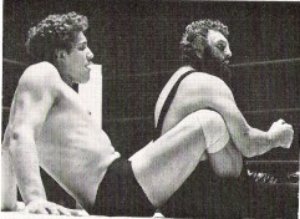 While his successes in titles were limited to one Royal Albert Hall Tournament Trophy win in 1969 which resulted in him earning a match with the gigantic Jean Ferre who later went on to become Andre the Giant. Bruno also achieved one Southern England title win over 'Judo' Al Hayes he was widely regarded as one of the finest big men in British Wrestling.

Kendo at the Reunion
4354 views