Bobby Barnes was one of the most recognisable faces in british wrestling having a career than spanned in excess of 30 years.

Bobby, who was born in Lewisham first entered the amateur ranks as an eleven year old at the Symbric Wrestling Club in his home town where he learnt the basics which would later take him on to the professional ring as a successful middleweight.

(Bobby Barnes in an early tournament in 1961)

In 1958 Bobby first came to the notice of Jack Dale of Dale Martin Promotions in Brixton and after a few hard fought visits to the gym was given his first match.  Bobby from the outset showed a lot of promise and was soon stepping into the ring with legends such as Mick Mcmanus and Jackie Pallo and with televised wrestling in its infancy and appearances limited Bobby remained focused on becoming a top star.

As many wrestlers did during this period, wrestling was done on a part time basis and he soon became the owner of his own hair salon and later convenience store.  Although Bobbys business interests outside the ring were making him a good living the call of the ring was just too much for Bobby to resist and he continued to tour the country taking on all competitors. 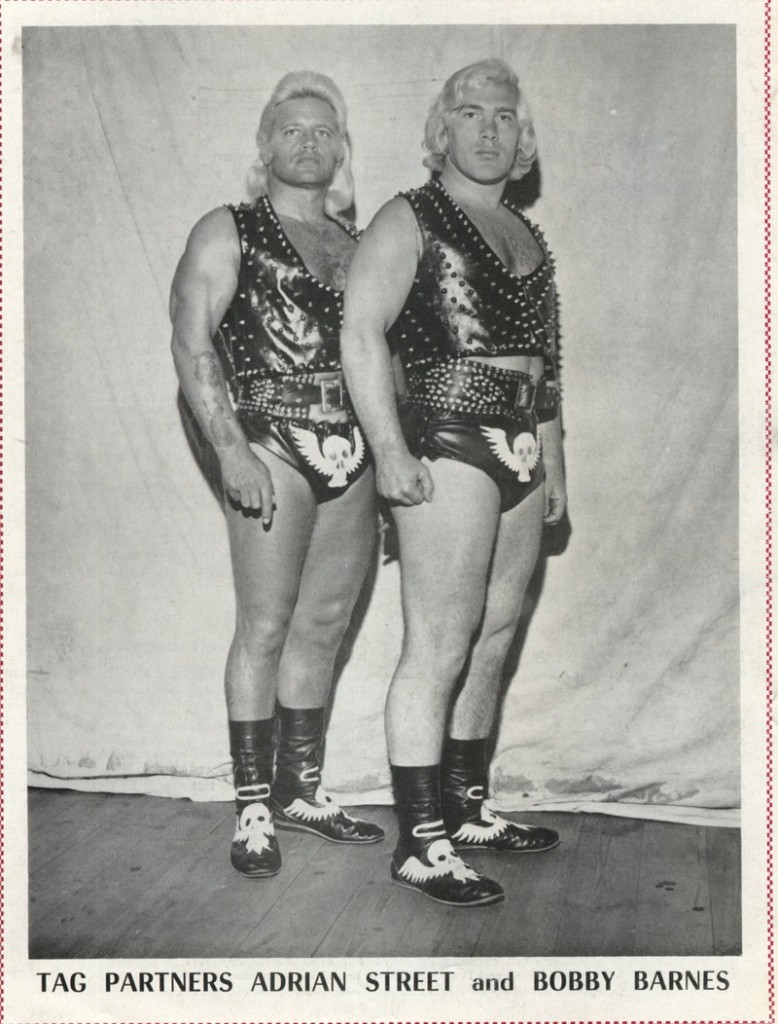 As televised wrestling became more popular it was soon decided that Bobby would team up with another wrestler who like him donned long blond locks and wore outrageous ring attire, this being one Adrian Street.  The team, named by the promoters as the Hells Angels, were soon a great success with fans around the country where they topped the bill on many occasions and as they paraded around the ring got some choice words from the fans sat at ringside and although they entered the ring to a chorus of boos were infact highly regarded.  In 1974 Adrian Street left the UK for America and although Adrian was replaced in the tag team by Magnificent Maurice the pair never achieved the same heights as Barnes had reached with Street.

(Bobby Barnes preens himself prior to his match)

Bobby soon returned to singles competition on a full time basis and took on many of the top names from the time including Les Kellett, Jon Cortez,  Bob Anthony, Catweazle, Vic Faulkner, Mal Sanders to name but a few.  By this time Bobbys ring attire was getting brighter on each appearance and although he continued to sport his flowing locks he was often seen with colouring in it and was soon sporting a very large comb whenever he entered the ring where he would preen himself with prior to tangling with his opponent.

Bobby continued wrestling well into the 21st century although his appearances became less and less with age creeping up on him and when he finally retired from the ring he kept a very keen interest in the wrestling business by giving his expertise to up and coming wrestlers.

Bobby is now a regular visitor  to the Reunion and can often been seen sharing a joke with the fans and anecdotes with his fellow professionals and we feel more than deserves his place in the Hall of Fame.